Intel can't hold a press conference these days without being harangued about ARM-based servers and the potential for microservers based on low-powered processors to bite into its Xeon server-chip biz. And for good reason: there is a growing consensus that these baby servers are going to catch on because of the inherently distributed and non-virtualized workloads at hyperscale data centers.

As El Reg has explained since the microserver crazy got going in earnest in 2009, not all workloads need lots of compute or memory; some need far more I/O. And in other cases, a bunch of wimpy Atom or ARM or Athlon cores can run chunks of a job as well as a far fewer number of brawny Xeon or Opteron cores, and do so burning a lot less power and at a lower price. And because the chips are cooler, you can pack them into a rack very tightly, and offer significantly higher compute density than you can get with stock Xeon or Opteron processors.

As long as distributed, grid-style software gets increasingly adopted and the company is worried about the electricity bill to power and cool servers – not all companies are, but companies that only twiddle bits for a living like Google and Facebook are obsessed with such matters – then there was never a question that microservers would be adopted in the market.

So just how big is this microserver business going to be? Market researchers at IHS have taken a stab at forecasting future microserver shipments and past ones.

Before we get into the numbers, not everyone uses the same definition of microserver. In the case of IHS, a microserver is a single compute board that burns less than 45 watts and that can have one or more microprocessors on that board. A microserver board has shared power, cooling, and cabling, just like blade servers do, but do not always have integrated management and other high-end (and expensive) features that blade servers do. (There is some blurring between the two, just as there is a blurring between microservers and multi-node rack servers with server trays.) 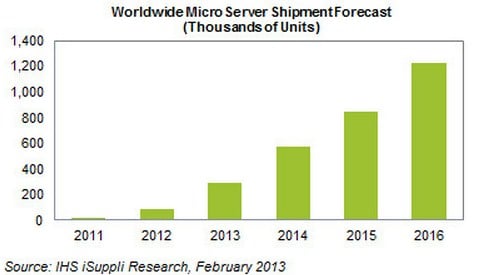 Cynics will point out that for all the noise about microservers in the past several years, the action has also been small. In a statement released to plug a more detailed report, Peter Lin, senior analyst for compute platforms at IHS, reckoned that around 19,000 microservers were sold in 2011. That's a pretty small base, so it is not that difficult to grow at the 363 per cent that was seen in 2012, to 88,000 units. And this year, given the still pretty small number of microserver machines shipped, getting another 231 per cent growth to 291,000 units is impressive, but not unexpected.

Of course, when you think about it, the 100 petaflops BlueGene/Q supercomputer from IBM is just a multi-hundred cabinet cluster of Power A2 processors on microservers linked by an optical 5D torus network. And once again El Reg asks: where is the commercial-grade Power A2 microserver enclosure that the Facebooks of the world might want?

Why are microservers taking off? Lin blames the smartphone and the tablet.

"Microservers provide a solution to the challenge of increasing data-center usage driven by mobile platforms," said Lin. "With cloud computing and data centers in high demand in order to serve more smartphones, tablets, and mobile PCs online, specific aspects of server design are becoming increasingly important, including maintenance, expandability, energy efficiency, and low cost. Such factors are among the advantages delivered by microservers compared to higher-end machines like mainframes, supercomputers, and enterprise servers – all of which emphasize performance and reliability instead."

The compound annual growth rate for the server market overall is for shipments to increase by about 5 per cent per year over the 2011-through-2016 forecast period, from about 9.5 million machines shipped in 2011 to 12.1 million machines shipped in 2016. Microservers will average a 130 per cent compound annual growth rate over the same term, which works out to a factor of 65 growth compared to a 27 per cent expansion in overall server shipments.

The other way to say that, if you do the math, is that if you take microservers out of the overall server shipments, the overall server racket expands half as fast. If you peel out commercial blade servers and modular servers, it would probably drop the growth for traditional rack and tower servers to nil.

All of this is good news, not bad news. It means that we can still engineer machinery for specific jobs – and moreover, that it is better when we do.

IHS did not provide estimates of microserver shipments by processor type or by vendor. That would have been truly fun data to look at. And revenue figures might also be interesting to see, too. This is, after all, ultimately about money as much as it is about computing efficiently.

What is clear is that AMD/SeaMicro and ARM server chip makers Calxeda, Applied Micro, Cavium, and maybe Samsung are looking to benefit from the microserver craze as Intel tries to hold the line with Atom and low-powered Xeon chips. ®