Windows tablet is most desired by office workers - report

Microsoft Surface tablets are top of office workers' wish lists, research from Forrester has found, in a surprising discovery from its yearly survey of global information workers.

That means 200 million people want their employers to get them a Surface this year, states Forrester in the report 2013 Mobile Workforce Adoption Trends. That's a figure that will have Steve Ballmer twirling around in ecstasy given that actual global sales of Windows tablets since October stand at 1.6 million. 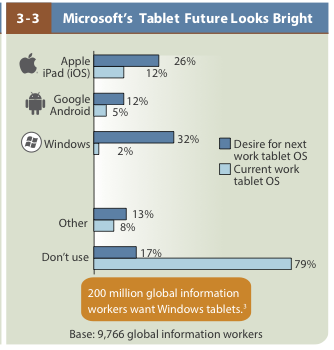 Nearly a third (32 per cent) of the 10,000 office workers interviewed by Forrester said they were interested in getting a Windows Surface tablet for work. Only 26 per cent wanted an iPad. However, 12 per cent already had an iPad while only 2 per cent had a Windows tablet. Why they thought they wanted one was unspecified. Still, if the IT procurement department are listening to their employees, it's good news for Microsoft.

But news for Apple in the enterprise sector was far from bad - the installed base of MacBooks and iMacs was on the rise: 9 per cent of laptops now used in business are now MacBooks, Forrester reported, while 3 per cent of desktops were iMacs.

It's a significant inroad into the enterprise sector for Apple, as the Forrester report pointed out:

Apple is the most important new technology supplier to enterprise since Microsoft itself in 1985. Apple’s presence in computers, smartphones, and tablets makes it a critical supplier.

And iPhones are the most wanted phone, with 33 per cent of workers questioned wanting to use an iPhone for work. Forrester estimate that 208 million global information workers want iPhones.