Now UK must look out for crappy SPACE weather - engineers

Solar superstorm bound to hit us 'at some point', warn boffins

Britain needs immediate plans on how to defend itself against extreme solar superstorms, the Royal Academy of Engineering has warned. 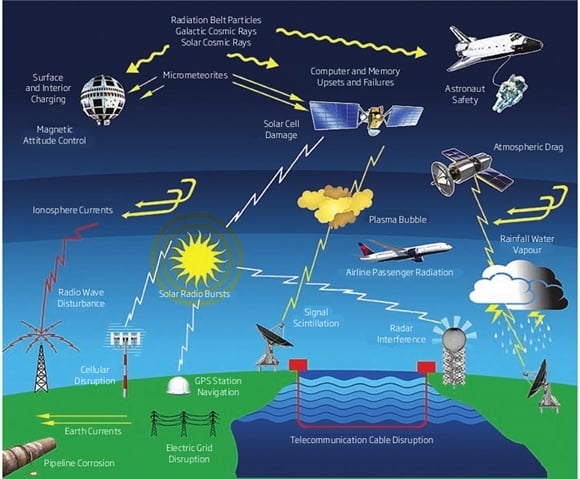 In a rather doom-heavy missive (PDF, 2.8MB), the RAE has said that although Blighty is better prepared than some other countries when it comes to the off-chance of extreme solar weather, it could do better.

Solar superstorms are a pretty rare occurrence, the last true Sun storm, called the Carrington event, was back in 1859. But despite the fact that most of these infrequent catastrophes don't affect Earth - and of those that do, only half actually interact with our environment and cause any damage - one hitting the planet is "inevitable at some point".

When that day comes, the solar strike will be capable of affecting the electricity grid, satellites, GPS systems, aviation and conceivably mobile communications. To ensure that no one has to stop tweeting about how they're lost right now because their TomTom is stuck in an infinite loop of "Go left, go left, go left", Britain needs to come up with a plan - right now.

The RAE wants the government to set up a UK Space Weather Board "to provide overall leadership of UK space weather activities".

"This board must have the capacity to maintain an overview of space weather strategy across all government departments," the Academy warned.

The report also recommends that the Engineering and Physical Sciences Research Council ensure that its research programmes "recognise the importance of extreme space weather mitigation".

In the meantime, companies and bodies running GPS satellites, mobile phone networks, airlines and the National Grid should be making sure that they have a back-up system in place. Mobe networks should be able to go for three days without global navigational satellite systems (GNSS), while aircraft navigation systems should have a contingency plan for loss of GNSS as well.

"In a solar superstorm of the size of the Carrington event, air passengers and crew already airborne would be exposed to a one-off dose of radiation," the Academy said. "The radiation doses received would result in a marginal increase in cancer risk. The same radiation may also upset the electronics on aircraft, but design practices will keep the risks to a minimum."

The National Grid has already bolstered the electricity grid against disruption, but it should take care to continue to do so, the RAE added.

How well current and future systems can mitigate against an extreme space weather event will be down to the specific technology and of course cost. But there should definitely be some money spent on engineers.

"Mitigation of the effects of solar superstorms requires a balance between engineering approaches and operational approaches – the latter being partly dependent on storm forecasts," the report said.

"It is likely to be a Grand Challenge for the scientific community and requires partnership with the engineering and business communities to be effective." ®