Quantum backs up 156TB backup box over EMC's back lawn

Quantum has introduced its second-largest deduplicating hard-drive array the DXi6800, and refreshed its top-end tape library.

First, disks: the firm's dedupe gear runs from the low-end DXi V1000 through the 4000 and 6700 and up to the high-end 8500. The 6800 fits between the 6700 and 8500 models. Its capacity ranges from 13TB to 156TB using 3TB drives, and with pay-as-you-grow pricing. The data ingest rate is up to 16.3TB/hour. Stored data is encrypted and Quantum said there's no performance impact from doing this; that's the beauty of self-encrypting drives.

It aims to beat EMC's market leader DataDomain comprehensively, both on price and performance; Quantum said customers can dedupe faster and cheaper with the DXi6800. The backup biz compared its 6802 to EMC's DD670 on performance and value - see the chart below - and claimed its product is three times more scalable, four times faster and takes up half the floorspace yet costs about the same. 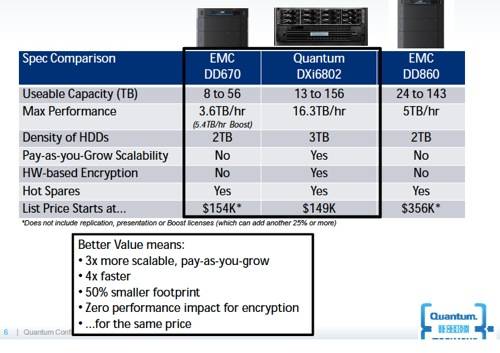 EMC's DD860 is also out-scaled and out-performed (by three times) and costs twice as much as the DXi6802, we're told. The Reg storage desk also notes that the high-end DXi8500 scales from 20TB to 200TB and ingests data at a rate of 11TB/hour - that's pretty slow in comparison to the 6802. Could an upgrade be coming?

Next, tape: Quantum's Scalar i6000 tape library has been updated with a 19in expansion module featuring a circular array of slots inside it. This gives the i6000, Quantum claimed, the highest slot density on the market and provides almost 5PB of capacity in a single rack and maximum multi-rack capacity is now over 75PB.

This module is compatible with all i6000 models and features a bulk load capability. Quantum said it only needs front and back access, not side access, and this means the i6000 takes up less data centre floorspace than competing products from IBM, Oracle and SpectraLogic, as the chart for a 1,000-slot library shows. At the 5,000-slot level, according to Quantum, Spectra's T950 takes up 1.1 times more floor space, IBM's TS3500 2.2 times, and Oracle's SL3000 2.8 times as much space. 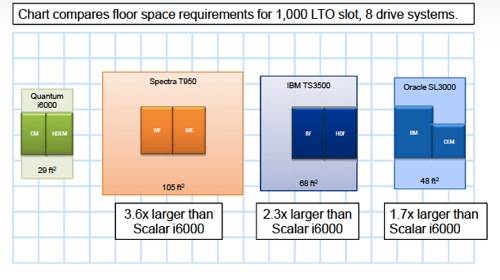 Worst game of Tetris ever

The i6000 now has active:active dual robotic systems instead of the previous active:passive design; this improves data access time as two tape cartridges can be moved simultaneously.

With Google using Oracle StreamLine 8500 libraries and Amazon using Spectra's T-finity in its Glacier archiving service, the market for high-end libraries is expanding. Will its growth be strong enough to encourage Quantum to build a high-end library above the i6000 in capacity and performance? We'll have to wait and see.

The DXi6802 is available now. The refreshed Scalar i6000 will be delivered in March. ®