But don't you see what that means, you dull-witted animal?

The missing link between man and beast is a ancient rat-like creature that preceded all placental mammals - a group that encompasses both whales and humans. 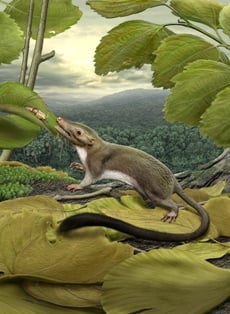 Boffins have figured out that primates and dinosaurs did not co-exist, as the mammal ancestors didn't start diversifying into placental mammals (which includes primates) until after the dino extinction event. The finding was made with a cloud-based publicly accessible database called MorphoBank.

"Analysis of this massive dataset shows that placental mammals did not originate during the Mesozoic," said lead author Maureen O’Leary, associate professor at Stony Brook University and a research associate at the American Museum of Natural History.

"Species like rodents and primates did not share the Earth with non-avian dinosaurs but arose from a common ancestor - a small, insect-eating, scampering animal - shortly after the dinosaurs’ demise."

Scientists use two major types of data to figure out evolution: phenomic data - observational traits like anatomy and behaviour - and genomic data in DNA. The new study combines this data in simultaneous analysis.

"Discovering the tree of life is like piecing together a crime scene - it is a story that happened in the past that you can’t repeat,” O’Leary said. “Just like with a crime scene, the new tools of DNA add important information, but so do other physical clues like a body or, in the scientific realm, fossils, and anatomy. Combining all the evidence produces the most informed reconstruction of a past event.”

Some studies have suggested that placental mammals were around in the Late Cretaceous period and then survived the Cretaceous-Paleogene (KPg) extinction. But this analysis puts mammal life 36 million years later and so contradicts the idea that these animals evolved due to the fragmentation of supercontinent Gondwana during the Jurassic and Cretaceous periods.

"Determining how these animals first made it to Africa is now an important research question along with many others that can be addressed using MorphoBank and the phylophenomic tree produced in this study,” said author Fernando Perini, professor at the Minas Gerais Federal University in Brazil.

The full study, "The Placental Mammal Ancestor and the Post-KPg Radiation of Placentals", published in Science, can be read here. ®