Should actually be the bank robbing the punter 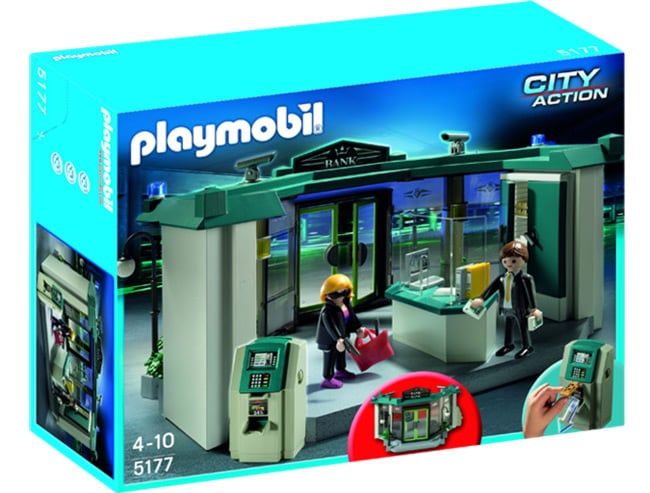 The "Bank with Safe" ensemble boasts a working cash machine although nippers are encouraged to make over-the-counter withdrawals via a pistol-waving blonde blagger - something hard-pressed parents may appreciate after stumping 40 quid for this box of shoot-'em-up entertainment.

Anyone wishing to choke on their morning coffee at the outrage is directed to the Daily Mail, where Danny Bryan of Communities Against Gun and Knife Crime thundered: "We don’t want to be encouraging young people to look at these sorts of things. I think it is horrendous that young people are given all these images to shape them. It is sending out the wrong message."

The Mail notes that Playmobil's previous form for corrupting delighting children includes knocking out "construction worker play sets which come complete with shovels, tools and three crates of what appears to be beer".

In light of this latest brouhaha, we presume the German manufacturer has cancelled any plans it may have had for a CIA water-boarding facility and the Ciudad Juárez drug cartel gun battle set, although it may well press ahead with a Paul Gascoigne rehab clinic and French horse meat burger-making factory. ®