Measures will be taken to avoid silliness

A poll has been opened to decide the names for two newly discovered moons of Pluto, and so far the response has been phenomenal, the SETI Institute told El Reg.

The two moons, the fourth and fifth found to be orbiting Pluto, have been provisionally named P4 and P5, but now the SETI Institute has teamed up with the International Astronomical Union (IAU), which officially names objects in space, to allow the public to have their say. The hope is to inspire more people to look to the skies, and to spur interest in the forthcoming Plutonian probe New Horizons.

Mark Showalter, senior research scientist at the SETI Institute's Carl Sagan Center, found the moons using the Hubble telescope. This would usually give his choice of name significant weight with the IAU, but the two organizations have agreed to open up the process, albeit under certain strict rules.

The moons must be named after characters in Greek or Roman mythology, and the names must relate to the classical underworld, since the dwarf planet itself is named after the Greek god of the dead. Attempts to nominate current celebrities will not be accepted, so don't bother trying, and SETI said it is monitoring the boards for signs of spamming. 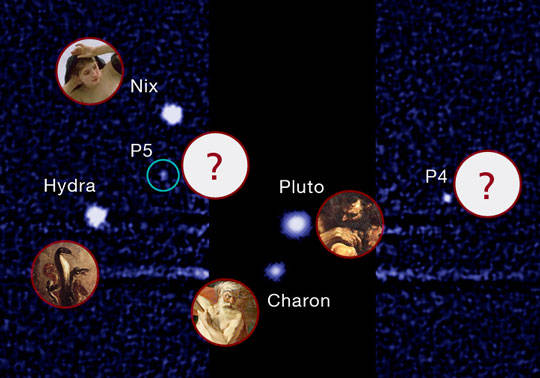 The Institute has suggested 12 suitable candidates to name the moons, including that of the Argonaut Orpheus, whose singing rescued his wife Eurydice (also a name suggestion) from the underworld, and whose curiosity then sent her back. Hercules is another option, as is the multi-headed dog Cerberus that Herc dragged out of the underworld in the last of his twelve tasks.

It's not just mythological characters that are suggested. The rivers of Styx – which divided the living and underworld – not the "classic" rock band – and Lethe, whose waters caused those who drank to forget everything, are also suggested options. Showalter tactfully declined to name his personal choice of title.

Showalter and the SETI team discovered the new Plutonic moons as part of the most detailed study yet of the orbital body, ahead of the arrival of mankind's first probe arriving in July 2015. NASA is keen to make sure its New Horizons probe doesn't splatter itself on some undetected rocks on the outer edge of the solar system, and has been checking the area out before uploading the probe's final course.

"A few months before New Horizons gets to Pluto it'll activate and do its own scan of the dark planet," Showalter told The Register. "By that point it'll have better resolution than Hubble, so it can look ahead for anything in its path."

The probe already has two different flight paths mapped out to which it can divert in order to miss any space debris, and can make the changes up to ten days before its arrival date. After completing its flyby of Pluto, the New Horizons probe will shoot out into the Kuiper Belt and become one of only a handful of man-made object to venture out of the solar system. ®