A Sri Lankan lag at Colombo's Welikada jail was relieved of his illicit mobe after it inconveniently rang during a cell search, alerting officers that he'd concealed it where the sun don't shine. 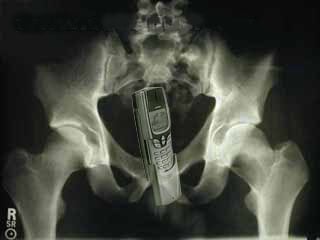 An official at the Colombo hospital where the phone was later extracted from the prisoner's rectum said of the ill-timed call: "The man had concealed the phone inside his person. Unfortunately for him, the phone rang at the wrong time and guards knew he had a phone at the wrong end."

Long-term Reg readers will be familiar with our world-beating "mobile stuck up [insert cavity]" coverage. Way back in 2001, we caused quite a rumpus with a report on the 20-year-old Taiwanese woman who required surgical intervention to extract a Nokia 8850 from her back passage.

Our artist's impression of what doctors might have seen (above) prompted an email tsunami of protests that the picture was fake, which in turn prompted us to add an exasperated clarification to the story.

The make and model of phone in the Sri Lankan rectomobe case is unknown. ®

Biometric IDs for all, cross-border interoperability not on the table
Security9 Feb 2022 | 2