A side order of schadenfraude

If only we’d all known it would be so easy: in the wake of being summonsed by the Australian parliament’s inquiry into IT pricing, Adobe has cut the price of its Creative Cloud suite to Australian users.

The pricing inquiry kicked off last year to look at the practise of geographic price discrimination by international vendors. While Microsoft, Apple and Adobe had been invited to appear in front of the inquiry to back up their written submissions, they had not done so.

In frustration, the inquiry decided to issue a summons and force the vendors to send someone to face the music. Adobe now seems to be the first vendor to crack: while not drawing a direct link between the timing of the price reduction and the summons, it has launched the new pricing for Creative Cloud.

The sudden attack of generosity doesn't stretch to products bought on disks, however. CS6 Design Standard, for example, remains hundreds of dollars more expensive in Australia than in America, in spite of the anaemic state of the greenback. 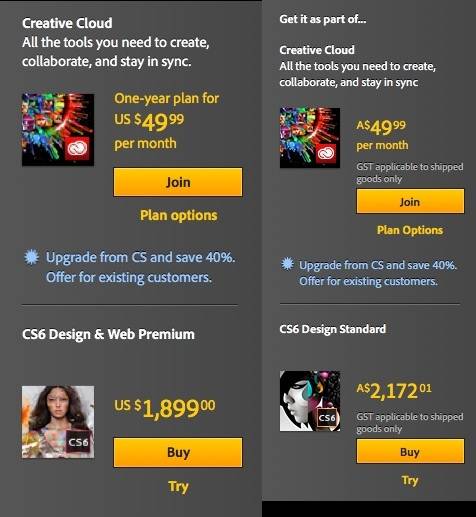 To be fair, Vulture South is not aware of what taxes are included in the US price, while the Australian price includes $197.46 in goods and services tax (GST). However, the US bundle (including Web Premium) is slightly different to the Australian offering.

The inquiry into IT pricing was launched in response to pressure from member of Parliament Ed Husic, ALP member for the seat of Chifley. The inquiry feeds into a wider debate in Australia about the way that high local prices for all manner of goods is sending consumers offshore for cheaper alternatives.

While much of the debate has been sidetracked by trivia – the impact of the GST on pricing, Australia’s relative cost of doing business, geography, and the absence of GST on imports under $1,000, all of which have been dismissed by the hardline economists of the nation's Productivity Commission – the summons promises to be the first time that vendors are put under a direct and unsympathetic spotlight. ®