Owners of Google Nexus devices have reason to hover anxiously over their System Updates screens once again, with reports surfacing that the Chocolate Factory has slowly begun rolling out the latest update to Android 4.2 "Jelly Bean".

A Reddit user going by the handle "WeeManFoo" was among the first to report receiving the over-the-air update on Tuesday, when he posted a screenshot that confirmed his Samsung Galaxy Nexus was running Android 4.2.2.

Around the web, other Android users soon chimed in, with owners of Nexus 7 and Nexus 10 fondleslabs also claiming to have received the update.

Curiously, El Reg's research didn't reveal anything about Google's latest mobe, the Nexus 4. It looks like the update has not yet been made available for those devices – but presumably it will be soon.

Just how much this latest minor-point release actually improves on the previous one, however, is not clear. The überfans over at Android Police have posted the raw developer changelog for the update, but although it lists lots of technical tweaks, it leaves the effects of those patches largely open to speculation.

Google has yet to issue a plain-language changelog for ordinary folks, and it did not respond to The Reg's request for further enlightenment. All the update's package manifest says is that it improves "performance and stability." 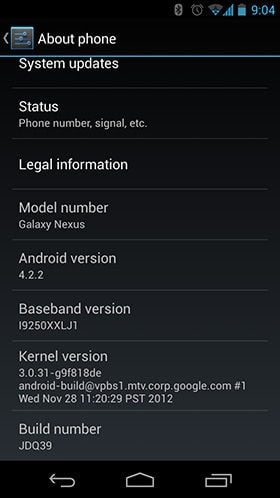 It's here, but what does it do? (Source: WeeManFoo)

To hear WeeManFoo tell it, however, even that is debatable. He's spotted a few trivial cosmetic tweaks and he thinks some of the animations are actually slower, but otherwise he says little appears to have changed.

Many users had been hoping that the update would fix an issue that cropped up in Jelly Bean 4.2.1, when music streamed over Bluetooth would occasionally "hiccup." But while WeeManFoo says his music seems to get interrupted less often with 4.2.2, he doesn't think the problem is entirely resolved.

On the other hand, Android Police's sleuths have been digging through the screens on their updated devices and have uncovered a few new features, albeit fairly minor ones. App downloads show animated progress notifications in 4.2.2, there are new toggle controls for Bluetooth and Wi-Fi in the Quick Settings, and Google has supplied a few new system sounds.

There's also a new security feature that makes it harder for someone to slurp the data off your phone using USB debugging. But unless you're an Android developer yourself, you may never even notice it.

Other than that, most of the changes in the latest Jelly Bean release appear to be strictly under-the-hood fixes.

If Google holds to its past practice, it may be weeks or even months before the update rolls out to every Nexus device. When owners of devices other than Google's Nexus line will be able to upgrade, however, is anyone's guess.

In fact, not even every device badged "Nexus" can run Android 4.2.2. Google dropped support for the Nexus S when it bumped Jelly Bean from 4.1 to 4.2, and it looks like Verizon's LTE version of the Galaxy Nexus will remain stuck on 4.1 forever, too, having been discontinued by the carrier.

Still, not having the latest version of the OS doesn't seem to be a problem for the majority of Android users. In all, only 1.4 per cent of all Android devices are running Android 4.2, according to Google's latest figures, and just 13.6 per cent are running any flavor of Jelly Bean at all.

Android 4.0 "Ice Cream Sandwich", a reasonably recent version, is now running on 29 per cent of devices. But fully 56.1 per cent are still running Android 2.3 or earlier – versions that are more than two years old. Compared to that, waiting for Google's staggered Nexus updates to arrive is no big deal.

Then again, if you're the type who absolutely cannot wait to get the latest Android releases, you can download and install 4.2.2 manually according to instructions found here. The process isn't for the faint of heart and you could end up disabling your phone if you don't know what you're doing, but who are we to stop you? ®