Could you build a data-nomming HPC beast in a day? These kids can

Everything you need to know about the undergrad cluster sport

When it comes to hardware, the sky’s the limit. Over the past few years, we’ve seen traditional CPU-only systems supplanted by hybrid CPU and GPU-powered clusters. We’ve also seen some ambitious teams experiment with cooling, using liquid-immersion cooling for their nodes.

Last year at SC12, one team planned to combine liquid immersion with over-clocking in an attempt to knock the clocks, er, socks off its competitors. While their effort was foiled by logistics (their system was trapped in another country), we’re sure to see more creative efforts along these lines.

There’s no limit on how much gear, or what type of hardware, teams can bring to the competition. But there’s a catch: whatever they run can’t consume more than 3,000 watts at whatever volts and amps are customary in that location. In the US, the limit is 26 amps (26A x 115V is just under 3000W). At the ISC’13 competition in Germany, the limit will be 13 amps (13A x 230V is, again, just under 3,000W) The same 3,000-watt limit also applies to the upcoming ASC competition in Shanghai.

This is the power limit for their compute nodes, file servers, switches, storage and everything else with the exception of PCs monitoring the system power usage. There aren’t any loopholes to exploit, either – the entire system must remain powered on and operational during the entire three-day competition. This means that students can’t use hibernation or suspension modes to power down parts of the cluster to reduce electric load. They can modify BIOS settings before the competition begins, but typically aren’t allowed to make any mods after kickoff. In fact, reboots are allowed only if the system fails or hangs up.

Each system is attached to a PDU (Power Distribution Unit) that will track second-by-second power usage. When teams go over the limit, they’ll be alerted by the PDU – as will the competition managers. Going over the limit will result in a warning to the team and possible point deduction. According to the HPAC-ISC Student Cluster Challenge FAQ, “if power consumption gets well beyond the 13A limit, Bad Things™ will happen” meaning that the team will trip a circuit breaker and lose lots of time rebooting and recovering their jobs.

On the software side, teams can use any operating system, clustering or management software they desire, as long as the configuration will run the required workloads. The vast majority of teams run some flavour of Linux, although there were Russian teams in 2010 and 2011 who competed with a Microsoft software stack, and they won highest LINPACK at SC11 in (appropriately enough) Seattle.

It’s amazing how much hardware can fit under that 3kW limbo bar. At SC12 in Salt Lake City, overall winner the Texas Longhorn team used a 10-node cluster that sported 160 CPU cores plus two Nvidia m2090 GPU boards. Texas had the highest node count, but other teams used as few as six nodes and as many as eight GPU cards. 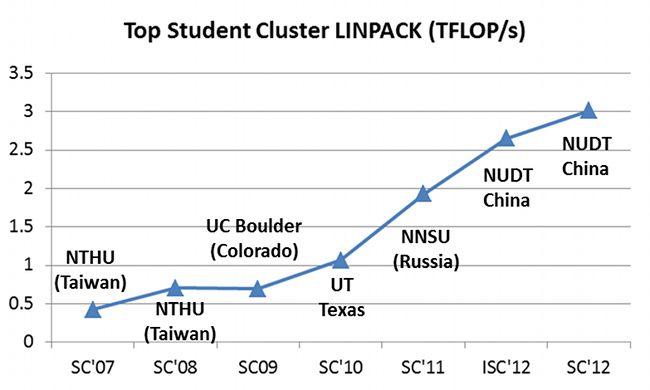 Look at the performance ramp from November 2009 to November 2012. In three years, student LINPACK scores went from .692 teraflops to 3.014 teraflops. In absolute terms, that’s an increase of 335 per cent. You can also compare it to a loose interpretation of Moore’s Law and assume that compute performance doubles every 18 months.

Using this measure, 2009’s .692 score would double to 1.38 in a year and a half, then double again to 2.77 at the three-year mark. So our student clusterers are doing a pretty good job from that perspective. They also compare favourably to the world's top 500 supercomputers list during the same period.

The LINPACK score of the number-one system on the top 500 supers went up by a factor of ten over the last three years versus the student clusterers who managed to wring 4.36 times more LINPACK bang out of their best hardware.

How the undergrads compare to the really big boys

While the kids are humbled by the results at the top of the list, they’re eking out slightly better performance improvements than systems at the median and end of the list.

Speaking for myself (and probably untold millions of maniacal fans worldwide), these competitions are highly compelling affairs. The one thing I hear time and time again from students is, “I learned so much from this”. They’re not just referring to what they’ve learned about HPC systems and clusters, but what they’ve learned about science and research. And they’re so eager and enthusiastic when talking about this new knowledge and what they can do with it – it’s almost contagious.

For some participants, the SCC is a life-changing event. It’s prompted some students to embrace or change their career plans – sometimes radically. These events have led to internships or even full-time career-track jobs.

For many of the undergraduates, this is their first exposure to the world of supercomputing and the careers available in industry or research. Watching them begin to realise the range of opportunities open to them is very gratifying; it even penetrates a few layers of my own dispirited cynicism.

The schools sending the teams also realise great value from the contests. Several universities have used the SCC as a springboard to build a more robust computer science and HPC curriculums – sometimes building classes around the competition to help prepare their teams. The contests also give the schools an opportunity to highlight student achievement, regardless of whether or not they win.

Just being chosen to compete is an achievement. As these competitions receive more attention, the number of schools applying for a slot has increased. Interest is so high in China that annual play-in cluster competitions are held to select the university teams that will represent the country at ISC and SC.

With all that said, there’s another reason I find these competitions so compelling: they’re just plain fun. The kids are almost all friendly and personable, even when there’s a language barrier. They’re eager and full of energy. They definitely want to win, but it’s a good-spirited brand of competition. Almost every year we’ve seen examples of teams donating hardware to teams in need when there are shipping problems or when something breaks.

It’s that spirit, coupled with their eagerness to learn and their obvious enjoyment, that really defines these events. And it’s quite a combination. ®