Cranks up CPUs and FPGAs on PureData, formerly known as Netezza

IBM hosted a briefing earlier this week to talk about some new members of its PureSystems offerings, but only one of the lineup they introduced was truly new – and it took The Reg a couple of days of digging to uncover pricing information.

The "Troy" Flex System modular servers from Big Blue and their PureSystems stacks for virtual infrastructure and applications come out of IBM's Software Group, not out of its Systems and Technology Group. And the Software Group is a bit loosey goosey when it comes to making hardware announcements.

But before we get into those announcements, here's a quick refresher course on IBM's new naming conventions of the PureSystems lineup that its Software Group rolled out last April: 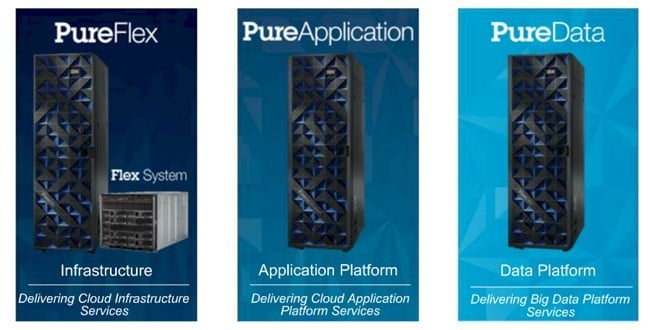 The three branches of PureSystems converged systems from IBM

IBM's briefing was ostensibly held to introduce new members of the PureSystems family. But as it turns out, the new PureApplications "Mini" was actually announced back in January and El Reg told you all about it at that time.

Basically, the Mini is a scaled-down version of the Xeon-based PureApplication W1500 system that has 32 or 64 cores instead of from 96 to 608 cores that the original W1500 stacks offered when they debuted in April 2012.

Pricing was not announced for these PureApplication machines – which is just another way they are like IBM's venerable mainframes. PureApplication is, in effect, how you might try to cobble together a mainframe out of piece parts and sew it all together with a management layer.

Still, sometimes you poke around, get lucky, and find pricing, as El Reg did with the actually new PureApplication W1700 stacks – more on that in a moment.

These W1700 machines are based on the Flex System chassis and use the new Power7+ processors etched by IBM's own fabs and launched in entry and midrange systems two weeks ago. In fact, Steve Sibley, director of worldwide product management for IBM's Power Systems division, tells El Reg that the company did not launch a Power-based PureApplication stack last year because it was waiting for the Power7+ to be ready and launched in the Flex System server nodes.

The Software Group doesn't like to talk about feeds and speeds of hardware, but according to insider documentation El Reg has seen, it looks like the new PureApplication W1700 stack is based on the as-yet-unannounced (at least separately as a standalone product) Flex System p460+ four-socket server module, the companion to the two-socket Power7+ node that came out unexpectedly last November.

The p460+ is a full-wide rather than a single-wide node, and IBM says that the important thing about that is that the W1700 setup running its AIX operating system and PowerVM hypervisor can therefore have a logical partition that spans more cores and memory than can be done on a p240 Xeon-based node in the W1500 setup.

While this is true, technically speaking, it's also true that Big Blue has launched a PureApplication setup using four-socket Xeon E5-4600 processors and sporting VMware. PowerVM can still make an LPAR that spans the entire machine, which in this case would be four sockets, 128 cores, and 256 threads, and you can allocate all of the main memory in the machine (which should be 2TB if IBM is supporting 64GB DDR3 memory sticks in the p460+ server node). VMware's latest ESXi 5.1 hypervisor can only make a virtual machine that spans up to 64 threads maximum and 1TB of virtual memory, while the Flex x440 Xeon node has the same core and thread count, but tops out at 1.5TB of physical memory.

What is perhaps more important than LPAR and VM scalability on the machines is throughput, and here IBM says that if you take the two W1500 and W1700 configurations that have 96 cores in them, the Power7+ setup has 88 per cent more throughput than the Xeon setup. Presumably this is for a transaction-processing workload.

The PureApplication W1700 stack comes with the AIX 7.1 operating system and the PowerVM hypervisor for it, the DB2 V9.7 Enterprise Edition database, and WebSphere Application Server Hypervisor Edition (V7.0, V8.0 and V8.5 are all supported), all preloaded on the server nodes. The W1700 comes in four T-shirt configurations, and all four have storage modules in the Flex System chassis that have 6.4TB of flash-based SSD capacity and 48TB of disk capacity in their base configurations.

The small configuration has 96 Power7+ cores and 1.5TB of main memory across the nodes; it has a list price of $2.97m. If I had to guess – and without a proper data sheet I do – I would say that this is two four-socket nodes using six-core Power7+ processors, clock speed unknown.

Remember, these are all-in prices, including hardware and systems software – you get these, plug in the power and network, and start loading applications onto them.

The PureApplication W1700 appliance ships on February 28. It does not support either IBM's own IBM i 7.1 operating system or the current Linux distributions from Red Hat or SUSE Linux, although there is no technical reason for this. If you want to do that, IBM suggests you buy a PureFlex system with Power7+ processors and load up. Or, if you want Linux on x86, to get a W1500 machine.

The new PureData N2001 appliance is a kicker to the x86-FPGA hybrid data warehousing box that Software Group took control of when Big Blueshelled out $1.7bn in September 2010 to acquire Netezza.

The Netezza appliance was rebranded as the PureData N1001 last October and put into new racks to match the other PureSystems machines, but the FPGA-driven S-Blades, which do all the funky sorting and chewing of data before it is passed up to the Netezza database running on x86 server nodes, was left in the BladeCenter chassis.

With the PureData N2001 machine – which IBM intimated was new this week but which it had quietly announced back on January 22 without telling anyone, with shipments starting on February 1) – IBM is upgrading the Xeon processors in the data warehouse cluster as well as the Xilinx FPGAs.

The system still does not have flash storage, by the way, and IBM is quite proud when it says that the clever storage algorithms implemented in the FPGAs against the heavily customized PostgreSQL database that underpins the Netezza system is so fast that it obviates the need for flash memory.

The N2001 has half as many S-Blades as the N1001, and they are each beefier and can do more work. The N2001 appliance has seven S-Blades, each with two eight-engine Xilinix Virtex-6 FPGAs, which are programmed with the data handling algorithms created by Netezza for its clustered database management system, coupled to a two-socket Xeon E5 server with processors running at 2GHz.

Those S-Blades have 128GB of main memory, 8GB for a slice buffer, and run a Linux kernel. They feed into two System x rack servers, which each have two 3.46GHz Xeon E5 processors and seven 300GB disks. The rest of the PureData N2001 rack is filled with disk enclosures, which have a total of 288 drives weighing in at 600GB. There are 34 spare drives, 14 drives allocated for the S-Blades, and 240 drives allocated for user storage.

How the PureData N2001 stacks up against its Netezza predecessor

In the case of the PureData N1001 and N2001, there is one FPGA engine per CPU core in the S-Blades, but there used to be one disk drive (roughly) for every FPGA-x86 core pair. Now, there is a little more than two hot disk drives for every FPGA-core pair in the system, not including spares and those allocated to the S-Blades.

It is the vastly faster iron, the much higher performance FPGAs, and the larger number of disk drives that are working together to provide up to 3X performance boost on database queries and a scan rate of 128GB/sec per rack.

Bob Picciano, general manager of IBM's Information Management division (that means databases, for the most part) within the Software Group, said on a webcast for the launch that the PureData N2001 was three times faster than anything Teradata had and twice as fast as Oracle's Exadata appliances.

Feeds and speeds and slots and watts of the N2001