Long-term civilization on a single planet is impossible

Earth's astronomers were lucky with Shoemaker-Levy, since they knew it was coming and the planet was in an excellent position to observe the impacts. The resulting damage caused a flurry of activity to discover similar threats.

"The giggle factor disappeared after Shoemaker-Levy 9," the comet's co-discoverer David Levy is widely quoted as saying, referring to those who dismissed the possibility of such a fate befalling Earth.

In 1996, Levy's colleague Shoemaker set up the Spaceguard Foundation to help coordinate spotting such species-threatening missiles; it collects data from sources both public and private. The name comes from the organization envisaged to serve the same purpose by science seer Arthur C. Clarke in Rendezvous with Rama.

NASA's own Near-Earth Object division is key to this and has a congressional mandate to find all rocks more than a kilometer across in the vicinity – but it's a big sky. According to NASA there are 861 such rocks in the area and 1,378 asteroids that are classed as potentially threatening.

And those are just the ones we know about.

The more we survey the Solar System, the more material we find either floating in slow orbits or whizzing through on their way elsewhere. But funding for such research is pathetically low: NASA got just $5.8m in 2010 to keep an eye out for the end of the world.

The agency has been studying asteroids using probes since the early 1990s, and has launched missions exclusively for studying them. The most recent, the Dawn spacecraft, has already scoped out the giant asteroid Vesta and is on its way to Ceres to check it out as well. Japan, Russia, and China have all sent out probes with varying degrees of success.

What we're discovering is that asteroids generally come in two forms: rubble piles held together relatively loosely or chunks of more sold material that have been blasted out of larger bodies. Comets, meanwhile, are relatively more fragile but usually faster-moving and more difficult to track.

NASA has set the goal of identifying 90 per cent of the Near Earth Objects, and that's a lot of throws of the dice that could turn up snake-eyes. Add in the remaining 10 per cent that we'll miss and it's clear that while we should hope for the best, preparing for the worst is also a good idea.

It wasn't just the astronomical community that got inspired by Shoemaker-Levy 9. Big bangs always get Hollywood's juices flowing, and the film-going public was subjected to a series of implausible blockbusters about mankind being saved from asteroids – always in the nick of time.

However implausible the films – Armageddon alone has 168 physical impossibilities according to NASA, although it's not known if the agency counted Ben Affleck's attempt to portray believable emotion – they have inspired a generation of boffins to do research on how to deal with such a threat. Based on what's come out so far, we're all doomed.

All current plans currently come down to two tactics: destruction and diversion. One of the first proposed methods was to fire weaponry at an incoming asteroid and either destroy it or blast it out of the way. The tricky part is achieving detonation close enough to the rock to have an effect at insanely fast velocities. In addition, doing so might just turn one big strike into lots of little ones, and add radioactive materials into the mix.

Such plans also underestimate the amount of explosive force needed to destroy a large object or even alter its trajectory. We're talking many times the total world arsenal of nuclear weapons, and that can't be cobbled together in a hurry, nor can the delivery system to reliably get them into the right place.

A slightly different technique, and one that could be particularly applicable to comets, is to use orbital lasers to burn away threats before they get here. Comets are typically darker than asteroids and might absorb more energy and thus break apart faster. Targeting a big object isn't so hard, but once it breaks apart that then you're back to the multiple-strike problem. 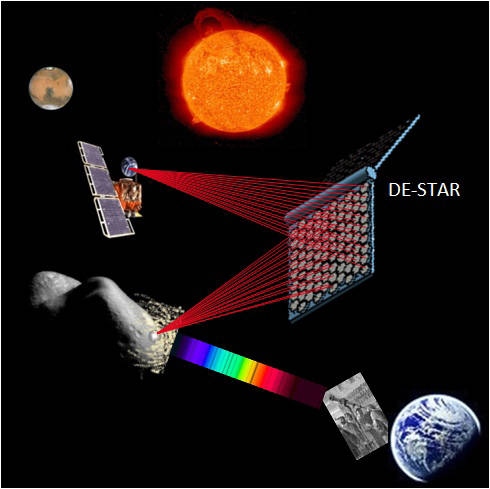 The laser approach does look slightly more promising for deflecting incoming rocks, however, by shifting their path an Earth's width or so by heating up the surface. There is, unfortunately, the possibility that as the surface disintegrates then the power of the laser is diffused, and we won't know until such a system is tested.

One recent plan even suggests letting the sun do the job by firing paintballs at the threat, but El Reg would hate to stake the planet on it.

The other type of solution – and the one favored by NASA – is to land on the foreign object and deflect it in situ. This would involve either installing an engine which would fire to change the path of the rock, or install a solar sail to use the sun's energy to change its course.

This would require an effort equivalent to landing a man on the Moon – or beyond, for that matter – and would require reaching the object, matching velocities, landing safely, building and maintaining the apparatus, and then getting off again – although no doubt there would be volunteers to skip the last part, if necessary.

NASA's best guess is that it would take seven years to get such a mission organized. And that's optimistic.

More than one basket

Given the short warning we got from 2012 DA14, the chances of doing anything to stop an impact are vanishingly small. Sooner or later we're going to get hit by something, and if it's big enough the planet could be uninhabitable by humans for years or even decades.

Worse still is the chance of impossible-to-stop impacts like those thought to have caused the creation of the Moon or possibly the asteroid belt. They're highly unlikely to come, but if we're looking to hang around for a few million years or so the odds of living those eons on one planet look short and we'll need a life raft or two, either self-sustaining space colonies or making a go of it on Mars or some of the Solar System's moons.

Ever since we've had a space agency, people have been complaining that it's all a waste of money. But getting into orbit and beyond has paid huge dividends in technological advancement, as well as intellectual inspiration, and it will ultimately be the only thing that offers our species a long-term lifespan. ®