Marvell notches another design win after Dell and Codethink boxes

Chip maker Marvell has notched up its third public design win for an ARM server, this one at Baidu, one of the two big search engine giants in China.

Avi Liebermensch, manager of server products at the maker of ARM processors and other kinds of chips, tells El Reg that the Baidu server is based on the company's Armada XP MV78460. This is the same quad-core processor that Dell chose for its "Copper" ARM sled servers announced last May and purchased by unspecified customers of its Data Center Solutions bespoke server business unit. The Baserock slab ARM server from Codethink also uses this Marvell processor as its main engine. 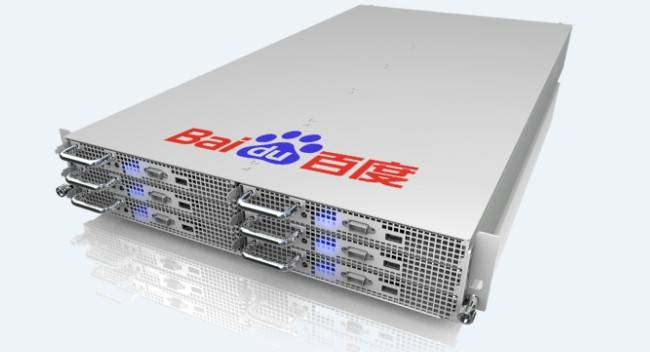 Liebermensch was not at liberty to give a lot of details on the Baidu machines, and China is celebrating its New Year right now so people in Beijing are not around to answer calls. But Marvell did sneak us a picture and gave us some insight into the machine that Baidu has worked with Marvell and an unspecified ODM to create.

As you can see, the Baidu ARM box has six sleds that slide into a 2U chassis, and Liebermensch says that this box has a total of 24 drives and supports a maximum of 96TB. That almost certainly means it uses 4TB SATA drives. The Dell copper sled crammed four of these Marvell Armada XP processors, four SATA drives, and a baby Ethernet switch linking the four processors to each other and to the outside world for the Copper sleds, and it could be that the Baidu box is built by Dell or is a knockoff of the Copper design.

The processor count on the Baidu server sled was not divulged. What Liebermensch did say is that Marvell had grabbed a storage controller that can handle SAS or SATA drives over a PCI-Express controller built into the chip and an Ethernet switch that implements two 10 Gigabit Ethernet ports and six Gigabit Ethernet ports. This sounds like the Baidu box has a slightly different network and storage setup than the Dell Copper box. 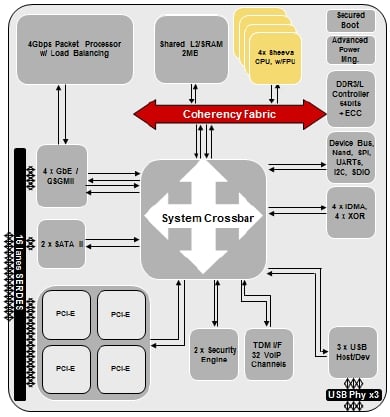 The Armada XP MV78460 uses Marvell "Sheeva" PJ4B cores, which are a variant of the 32-bit ARMv7-MP design that has the 40-bit memory addressing added to it. That means each socket can address up to 16GB of main memory, in this case, which is more than enough for a lot of workloads.

Baidu has opted for a version of the chip running at 1.6GHz, just like Dell. The Armada XP chip has a crossbar interconnect that links all of the elements of the SoC together, which might be out there on a much larger motherboard if this was not an SoC. Each Sheeva CPU has a floating point unit and is linked over a coherency fabric to a 2MB on-die L2 cache. The memory controller has ECC scrubbing and runs at up to 1.6GHz, matching the clock speed if you want.

There are four PCI-Express 2.0 controllers on the chip, as well as controllers to drive two SATA peripheral ports and four Gigabit Ethernet ports. There is also a 4Gb/sec packet processor (handy for some things, not so much for others) and a security engine for encrypting and decrypting data. All in a 15 watt thermal envelope.

It is not clear which "Cheetah" switch module that Baidu has embedded on the sleds in the server, but it could be the same as the "Cheetah 3" 98DX5156 Layer 2/3 network switching that Codethink is using in its Baserock Slab, an eight-node system that comes in a 1U chassis that is based on the same processor from Marvell.

What Baidu was looking for in this particular server was to get computing power right next to the storage, not to create a JBOD that then hooks into an external server. Given this, it is reasonable to assume that the Baidu box has four Armada XP chips nodes talking to four drives on each sled.

The servers run Ubuntu Server 12.10, which is the Linux from Canonical and which is the second release to formally support ARM servers. Marvel has also cooked up a systems management tool for Baidu that speaks IMPI 2.0 that can work with its existing control freakage.

Marvell is very excited, calling this the first real deployment of ARM in the data center, and says that Baidu is not just experimenting with machines, but actually installing these machines to run some of its "cold storage" software, known internally as Pan, after months of development and testing.

When pressed about how many machines Baidu had installed, Marvell would not say. That would irk its customer during the holiday. But what Marvell could divulge is that the setup had a 25 per cent lower total cost of ownership compared to previous x86-based servers used by Baidu for the same purpose. ®