From stage to stream: The unseen tech at the BRIT Awards 2013

You'll never moan about the price of Thunderbolt cables again

Feature If you think you know all about the O2 Arena having visited it when it was called the Millennium Dome, then think again.

When the site was sold to entertainment biz AEG in 2004, it was gutted and turned into a concert venue; all that remains of the original structure is the tent. Today, its owners claim it’s the busiest live venue on the planet.

It’s a transformation that involved fitting it out with audio and video interfacing to accommodate the latest digital standards, along with conventional analogue signal paths. The upshot of it all is miles of copper and, more importantly, optical cabling delivering pristine quality for stage and broadcast. 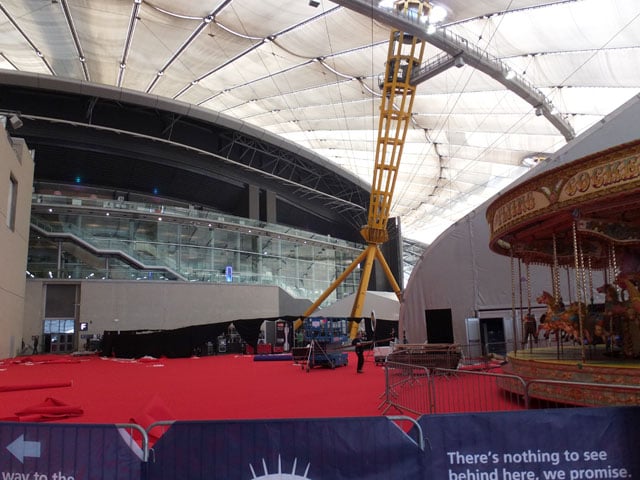 Nothing to see? Well not until later, but they've already rolled out the red carpet in the hospitality area

Tonight, for the third year running, the O2 Arena hosts the BRIT Awards which presents a range of challenges beyond putting on a show for the audience in the auditorium. The event involves juggling multiple live music acts with a live TV broadcast on ITV.

Forget the glamour, forget the cool video software, this is a get-your-hands-dirty view of the event that’s effectively a one-way, multicam video conference to an international multiplatform audience. With 30-odd cameras and up to 256 audio channels engaged in the event, a successful night for the outside broadcast crew has nothing to do with their favourite band walking off with a gong, but is all about getting the show from stage to stream without a hitch. 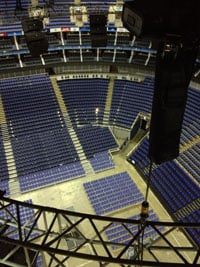 Quiet times: For tonight's BRITS, over 300
motors will arrange the overhead rigging

John Clerke has been in the professional broadcast video business for decades wearing a number of different hats and these days modestly refers to himself as the ‘patch man’ at the O2 Arena. It’s a critical role that ensures that audio and video is delivered to and from stage to whoever needs it. He’s been present at virtually all the events at the venue since its refit and has designed and overseen the installation of the AV cabling throughout the building. Well known in the business, he gives a very realistic view on how these events are organised.

“Most shows are self-contained and the only thing the crew want is power. The house PA gets used for conferencing but typically there's very little connection to the ‘house’ systems apart from things like getting the hearing aid loop to work. Most bands come with their own kit, PA, riggers – everything. They put it up in the ceiling, make it work and go away at the end of the evening.”

As with all major venues, what the production company brings along to the show has to be specified ahead of time. That includes gear like camera jibs, cranes and tracks – spider cams that fly around on wires are even banned in some places, so it makes sense to know in advance what’s allowed. The OB (Outside Broadcast) Manager works out where to put cameras, making it all near as possible to the various media panels that links back to the OB trucks with all the sound and vision mixing gear in them, among other things.

The 60 strategically placed media panels are key to the network of cabling that stretches across the venue via a central patchbay featuring the latest digital audio and video interfacing along with analogue options. Without this array, the show would be nigh-on impossible to produce as the media panels – each with their own carefully labelled connectivity – minimise unwieldy multicore runs on the venue floor and extend the reach of conventional cabling.

The media panels contain dedicated interface types for camera and audio use and feature fibre optic connectivity that can be used for either. There's no need for miles of chunky multicore when a single fibre can be used to shunt around 24-channels of broadcast quality audio. In the same patchfield, another fibre link could easily be distributing HD-SDI video to different equipment and facilities – given the distance limits with this video standard, optical comes to the rescue. 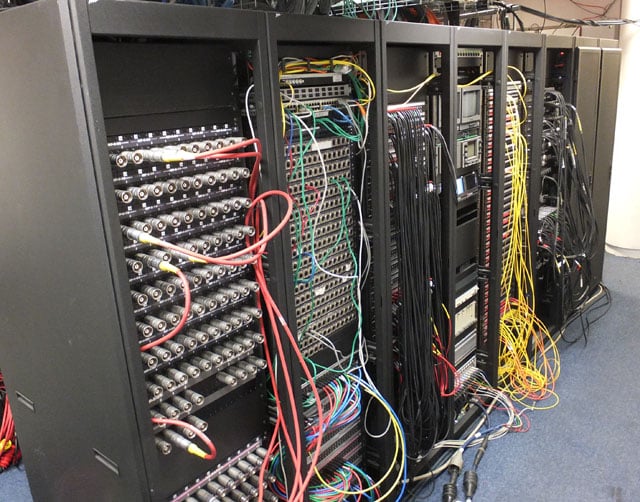 The media panels link to the main patch room which, from left to right features Triax, Ethernet, analogue audio, ST optical and SMPTE 304M connectivity, to name a few

There’s a bit of history behind these needs as Clerke explains, “When digital TV was developed they calculated what the longest length of cable in an average studio was and so standard def digital TV was developed to work at distances up to 300m. So when they designed the first Serial Digital (SDI) cabling protocol, that all worked very well in a standard studio. No probs.”