One of the challenges in shrinking electronics is that some parts, like capacitors, stubbornly resist being minaturised. The charge-carrying capacity of a conventional capacitor is, after all, partly a function of the surface area of its plates.

Graphene is known to have properties that make it attractive as a “supercapacitor”, but it’s difficult to work with – a challenge the UCLA researchers claim to have cracked with a humble DVD burner.

Richard Kaner of the university’s NanoSystems Institute, working with graduate student Maher El-Kady, say they’ve used the DVD burner to fabricate supercapacitors made from a layer of graphitic carbon one atom thick. The big deal, they say, is the simplicity of manufacture, which would make their micro-supercapacitors manufacturing-ready.

The “consumer-grade” LightScribe DVD burner they used was able to build more than 100 of the supercapacitors on one DVD “in less than 30 minutes”. 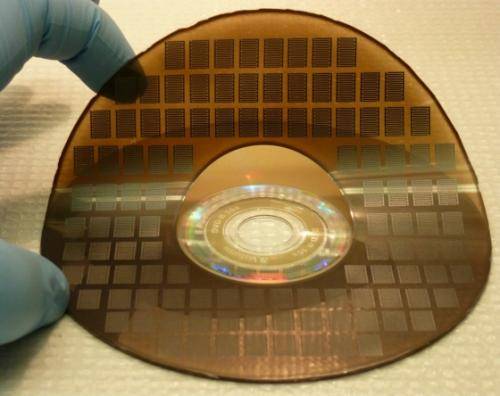 Instead of trying to stack the graphene electrodes, the researchers printed them with an interleaved pattern, which maximised the surface area the electrodes present to each other (hence increasing the charge-carrying capacity).

The manufacturing technique, described here, is simple: a layer of plastic was glued onto the DVD, and coated with a layer of graphite oxide. The burner’s laser then creates the patterns that become the capacitor.

The researchers discuss the technique in the video below. ®