4G in the UK? Why the smart money still says 'Meh'

Along with the industry

Analysis Last September, when the UK's first 4G service emerged, I promised to sit out the switch to high-speed mobile broadband for as long as possible. What I didn't expect was the mobile industry joining me on the sidelines. Budge up, please - it's getting a bit crowded here.

It would not be fair to say the UK mobile industry is boycotting 4G - in the week that it's spent £2.3bn buying new spectrum. It's just that the networks are being about as cautious as they can possibly be, without looking completely uninterested.

Even EE, the network with an exclusive head-start on 4G in Blighty, seems determined that you, dear punter, should stay on 3G. With 4G's high prices, crap coverage, appalling battery life and terrible data deals, the reasons for sticking to 3G looked fairly compelling.

And that was before T-Mobile UK, operated by EE, started to dangle offers like this one in front of us: 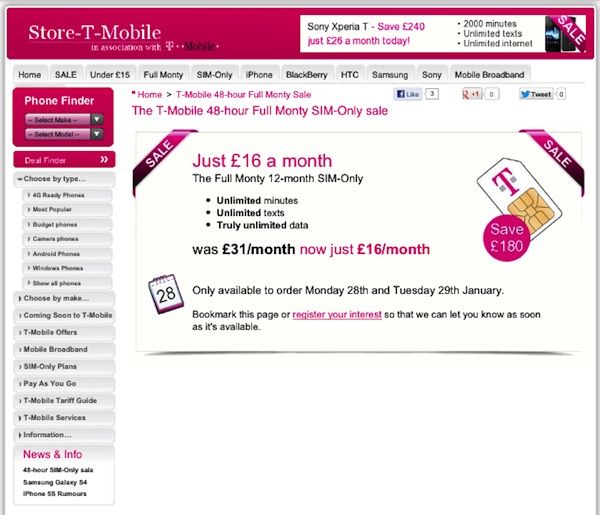 This week, in addition to the 4G spectrum auction, we've had the first quarterly EE figures since its 4G LTE service went live last year - and the absence of detail from that corner is pretty conspicuous. So let's take stock of the market.

Firstly, it's now clear that EE made a 4G miscalculation as serious as George Osborne's. The Chancellor counted his 4G chickens before they'd hatched - he expected the 4G licence sell off to raise £3.5bn; cue much finger-pointing between the Treasury and the Budget Office. EE overestimated the value people put on high-speed mobile data.

Once you've got 4G, there's something a little miraculous seeing web pages rolling into your mobile faster than they do at home over Wi-Fi. But at £61 per month for 20GB of data, that's a luxury few people appear to want or can afford. The tariffs succeeded in generating next-day headlines such as "get 4G for only a fiver more than the cost of 3G". But as soon as people saw the small print - and realised they'd bust their data allowance in a few minutes, the die was cast.

Secondly, and this is rarely talked about in polite company, the delay in getting 4G spectrum in the UK has actually suited the mobile networks quite nicely.

Telefonica last year scrapped its dividend, flogged off its stake in China Mobile and floated O2 in Germany in an effort to pare back its €58bn (£50bn, $76.5bn) debt. The Vodafone Group has been tackling its $34.5bn debt with bond issues. Three only began to make a profit on 3G in 2011. You may call this prevarication, but a shareholder would call it prudence. And this is certainly justified after EE's numbers this week.

The absence of hard numbers on LTE take-up was widely interpreted by analysts to mean it hadn't exactly gone like gangbusters. Meanwhile the 3G take-up was boosted by offers as the one illustrated above - and still fell short of previous years. It took considerable self-control, over 50 rounds of bidding, to maintain caution during the 4G auction: nobody panicked and nobody overpaid.

So we'll begin to see O2 and Vodafone launch their 4G services around June, and Three by around October. Three has already promised it won't put a premium on its 4G LTE data service: it'll be around the same price as its 3G service. At that point, if not before, expect to see EE's ludicrous tariffs thrown overboard.

But will that mean LTE then becomes a no-brainer? Again, I'm not so sure, and for a few reasons.

One is that the network capacity has yet to be built out. As we know, the LTE "launch" left many major UK conurbations without LTE, including Leicester and Stoke. Another is that we're still at least one, and probably two, generations away from integrated silicon that makes power consumption acceptable. It takes several iterations before the baseband is integrated and power optimised to a decent level. The first 2G and first 3G handsets were notorious for this - the power issue was eventually fixed, but it doesn't happen over night. I've been testing 4G and starting the day with a full charge: if I want the handset to last much past 4pm, I turn off 4G.

All this is fine if you want LTE for mobile broadband to which to tether other devices, or know that you'll be close to a power socket during the day. However, if there's a killer application out there for 4G, it's doing a great job of hiding.

Yes, it's nice to get web pages quickly. It's also nice to have a phone that doesn't need to be plugged in all day, and 20Mbps - perfectly attainable today on dual channel HSPA+ networks - and an all-day battery is pretty attractive.

By the final quarter of the year, with new devices on sale and competitive tariffs finally available, we'll be in a good place to make a sensible judgement on 4G LTE in the UK. 'Til then, I'm still sitting it out. ®