Why the blanks matter the most

As we know from the Mid Staffordshire hospitals scandal, despite "the terrible and unnecessary suffering of hundreds of people" from poor care, nobody was sacked. The lowliest staff were cleared by the Nursing and Midwifery Council, the regulator that ensures they do their job.

Similarly, the BBC can commit a monstrous libel on a public figure based on the flimsiest hearsay, yet nobody lost their job as a result of the McAlpine blunder.

(Yes, it's true that BBC director general George Entwistle was bundled out of the door when it became apparent to the nation that he was a weapons-grade imbecile, unwilling to enquire what was going on beneath him at the BBC because it might upset bureaucratic protocol and procedures to do so. But he also departed with a £877,000 pension and a £450,000 payoff - TV licence fee payers also helped him out with his legal fees and public relations advice.)

The BBC Trust today published witness evidence to the Pollard review of Newsnight's bungled handling of a Jimmy Savile investigation.

This should increase public confidence in an organisation to which subscription is (like the NHS) effectively compulsory. But important parts have been redacted, CIA-style. Some of these redactions are quite justifiable. For example, the editors' judgements on the credibility of witnesses has been redacted. The identity of a Savile witness described as "flakey" has been removed. This is right and proper. Much of what remains is exceptionally tedious as the inquiry sought to establish facts and timelines.

But criticism of senior BBC management has also been removed. It's not in the public interest, you see. If press reports are to be believed, the trust wanted to release unexpurgated transcripts, but failed. This may simply be backside-covering spin, but let's assume it was true. If it is true, then there's a much more disturbing picture, raising the question: "Who's in charge, here?"

Who are the lords of the board?

The BBC Trust presents itself as "the voice of the public" and it has an important job. While the trust is part of the BBC - it was the New Labour makeover for the old Board of Governors - and trust members are BBC employees, it's the ultimate governing body of the broadcaster. It keeps meddling politicians at arm's length.

Remember that what makes the BBC distinctive is not the public-service regulations nor the funding model; there are many worthy public-service broadcasters around the world with similar regulatory obligations, and many receive tax levies, or thereabouts, to carry them out. But many are timid and beholden to politicians or interest groups. The independence is the unique institutional strength of the BBC. If the trust fails, then calls to intervene become unstoppable.

Witnesses submitting information to Nick Pollard were all told that the results would be made public; Newsnight presenter Jeremy Paxman made it known that he was particularly keen to have his scathing transcript published in full. 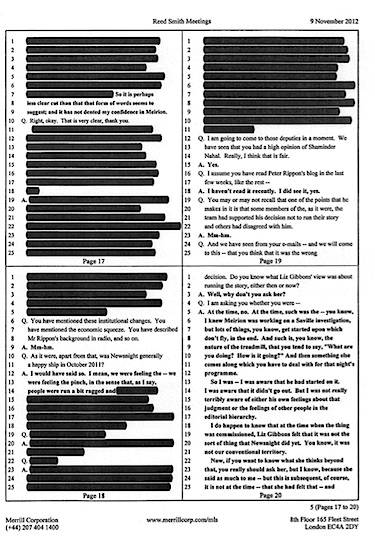 Someone doesn't want you to read Paxman being rude about them

These documents paint a very unhappy picture, but the BBC needs to be open - more open than others would be - in confronting the facts that lie behind Nick Pollard's report. A limited amount of text has been blacked out for legal reasons, but no one could say that the effect has been to sanitise this material, which again puts a spotlight on some of our failings. We need to acknowledge these shortcomings and learn from them.

In his testimony to Pollard, Lord Patten criticised "a lack of imagination" in the decision taken to show tribute programmes about Savile after his death, and suggested that rebroadcasting just the Louis Theroux documentary on the tarnished TV star may have been preferable.

The chairman said the BBC had "more leaders than China". But Entwistle was his first choice as director general, a catastrophic leader in a crisis, and Patten also admits that "George persuaded me that it wasn't a very good idea" to launch an investigation into why Newsnight's Savile film was axed. Patten also thinks that Entwistle, before appearing before MPs in Westminster to explain himself, "maybe listened a bit too much to the legal advice he got".

A good point. But isn't that true of the redactions, too?

As readers familiar with the BBC's strategic response to Freedom of Information requests will know, the powerful internal legal team has begun to set policy. The Beeb's social media guidelines, its US website traffic numbers, and even the identity of judges in the annual Radio 2 Folk Music Awards have all been withheld from disclosure under a "purposes of journalism" derogation. Fighting the public racks up huge legal fees. Internal lawyers are an important operational function, but they shouldn't set policy. On a key transparency issue, the tail is wagging the dog.

Investigations by the trust are urgently needed into the McAlpine catastrophe, which was glossed over in the Savile inquiries, and the empire created by BBC lawyers. Otherwise, the redactions appear to confirm what one sociologist calls a "New Clerisy" - an emergent middle-class elite that is untouchable and certainly unsackable. ®