Something for the Weekend, Sir? Not a day goes by without a dozen press releases on the topic of cloud computing thrusting their way into my inbox (ooh, matron). I think I’ve made my opinions of the cloud con clear enough in previous columns but for the benefit of newer readers, let’s just say that I think it’s cock.

Well, that is, cloud computing itself isn’t cock. In fact, it has balls. It’s just that the concept is arse. Hang on, I seemed to have slipped into Team America mode. Let me start again.

An internet service that keeps your data easily accessible and up to date on and from all your devices is a boon. It’s just that the concept is oversold, in my view, especially given that no one has yet convinced me that it’s any more secure than extravagantly slipping a wad of Adams in your back pocket and locking them down with a pop-fastener.

If the following video demonstration was the reality of cloud computing, I’d be a damn sight keener on the whole shebang - and it would keep wayward pigs in check too:

I simply refuse to be persuaded that cloud computing is the product of geniuses who charge £500 an hour. Sure, there’s some nifty tech in even relatively straightforward cloud utilities, but many of us have been doing this kind of thing, albeit with manual syncing, for years. Come to think of it, lots of people have been doing it without realising.

One of my most loyal clients fits that last category. It’s a small company run by two men who are, well, let’s say of ‘a certain age’ and no longer need to pay fares for their commute into town. They can sell, they can make things happen and can adapt their business model at the doff of their trilbys, but they’re about as computer-literate as a house brick wrapped in brown paper and buried in the garden alongside their grandchildren’s goldfish. They know even less about computers than an advisor to a governmental IT project. And that’s swearing.

The first time I walked on-site two years ago, it was like stepping back in time. Situated in on the top floor of a Victorian warehouse with 5ft thick walls, the open-plan office smells like an old library. Every item of furniture is brown. Apart from the noise of police cars wailing up and down the Hackney Road, the generally calm atmosphere is punctuated only by the clacking of a typewriter.

Oh yes, the typewriter is essential for sales booking forms, they tell me. “How else can you make carbon copies?” they ask rhetorically. Who could argue with that logic?

As with many oldy, moldy offices, stacks of ancient correspondence and faded news clippings rise here and there, forming what looks like a papier-maché scale model of downtown Manhattan. Given that I can’t throw anything away, I can hardly call these guys hoarders, but they have maintained a full set of cardboard boxes for every item of office equipment they have ever bought, certainly dating back to the last century, and I suspect even the one before that.

The stuff I find among this hoard provides no end of entertainment at lunchtimes. It’s like being let loose in the warehouse at the end of Raiders of the Lost Ark. On my last trip, I discovered this pair of tasteful candleholders: 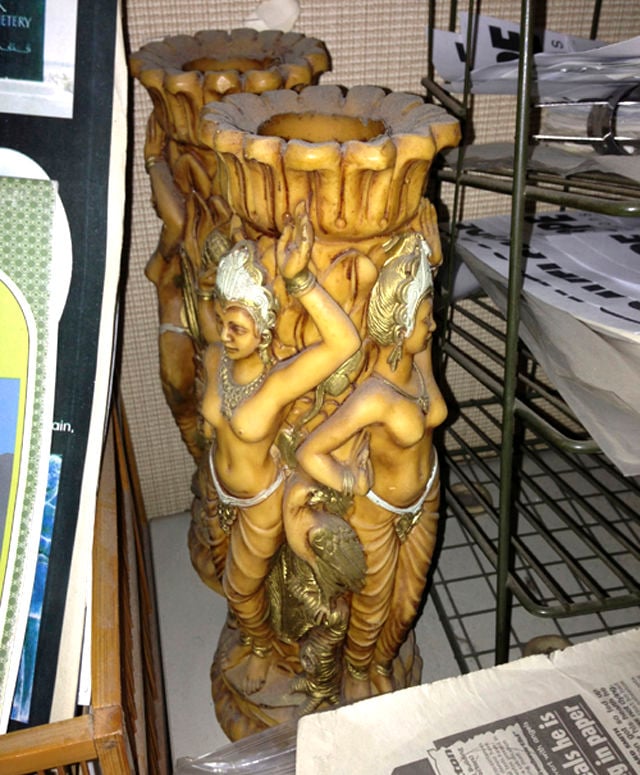 Frankly, I can’t wait for a power cut.

Next page: Hey, you, get off of my cloud
Page: