The designer of iconic Dr Who villain the Daleks has died.

84 year-old Ray Cusick died in his sleep over the weekend, reportedly of heart failure. Dr Who Magazine broke the news with a Tweet.

It's with great sadness that we report the death of Ray Cusick -the designer of the Daleks. Half a century on, his iconic design lives on.

Fan site Eye of Horus reproduces an interview Cusick once gave to the Yorkshire Evening Press in which the designer said the design for the villainous aliens was inspired by the shape of a pepper pot. In another interview at drwhointerviews.wordpress.com, Cusick said he got the job after Ridley Scott’s schedule made it impossible for him to do the work.

Cusick’s thought process led him to believe the Daleks had evolved into little more than brains, so would need a robust enclosure and small wheels so that viewers could never quite see how they moved. That plan went slightly awry when, on location, “… with bumpy pavements etc., they rattled like an old biscuit tin …”. Pneumatic wheels fixed that, but needed more space, “which meant deepening the skirt on the bottom to accommodate the wheels.”

The interview goes on to say the crew were quickly taken by the Daleks and imagined they would adorn merchandise and be the subject of their own spin-off movies. 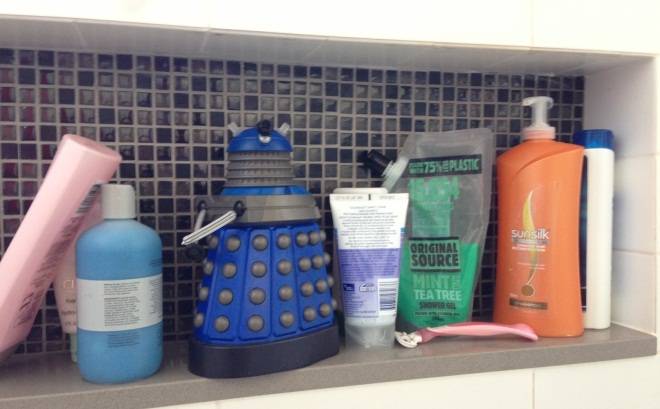 A Dalek-shaped bubble bath bottle belonging to the author's son, an artefact
that speaks eloquently of the villains' enduring popularity

Both came to pass and of course Daleks remain an important part of Dr Who to this day, with merchandise galore to be had and the grating electronic refrain "exterminate" a pop culture staple.

Cusick is survived by two daughters. ®