Australian supercomputer to use geothermal cooling

The petascale powerhouse needed by ASKAP is being built in water-short Perth, so instead of sucking nearly 40 million litres of water from the city’s supply, CSIRO plans a geothermal solution to the problem.

The science agency began investigating the viability of a geothermal approach in 2011. Its original was to seek out hot aquifers from 3 km down, and use the heat to power the coolers.

What’s being implemented now is considerably simpler. The water to cool the Pawsey machine will be drawn from an aquifer 100 meters below the surface, into a heat exchanger to provide cooling for the computer, and then returned under pressure to the aquifer, with no net loss of groundwater.

Out at the Murchison site of ASKAP, CSIRO is making progress in commissioning the facility. Since test observations were made in November 2012, the commissioning team has been moving beamformers, digital systems and observing facilities into their permanent home, the Murchison Radio-Astronomy Observatory control building. 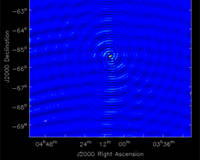 The MRO control building has two layers of RFI shielding of 90dB per layer.

The new location has been tested on long-track images of radio source PKS 0407-658, and remote observation systems have also been tested from the Boolardy Homestead 42 km from the control building – a step towards full remote operation of the facility.

Upcoming installation work will include integration work at the Boolardy Engineering Test Array, whose six ASAKAP antennas are due to be assembled mid-2013. CSIRO is also setting up a remote observing capability in its Sydney Astronomy and Space Science HQ. ®