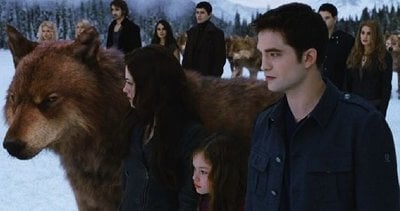 Sandler secured Worst Actor for That's My Boy, and the "comedy" also walked away with the Worst Screenplay title.

That the Razzies took this last opportunity to have a pop at the Twilight franchise came as no surprise. The Academy Awards waited until the final Lord of the Rings outing to dish out a Best Picture Oscar, and Razzies founder John Wilson said last month: "This is our equivalent to The Lord of the Rings. It's our members' last chance to razz Twilight."

Similarly, Sunday's Oscars love-in went according to expectations. Argo took Best Picture, while Daniel Day-Lewis soaked up the applause for his Best Actor in a Leading Role achievement (Lincoln).

Jennifer Lawrence, of Silver Linings Playbook, now has an Actress in a Leading Role Oscar to put on her mantelpiece, and Anne Hathaway went home with the Actress in a Supporting Role gong for her part in Les Misérables.

Quentin Tarantino's Django Unchained was never a real contender for Best Picture, but the film's Christoph Waltz mounted the podium to collect the Actor in a Supporting Role statuette, followed by Tarantino himself who is now the owner of an Original Screenplay Oscar.

Vote result good news for new users, but might be bad for remixes
OSes3 Oct 2022 | 4

MERGE means more code can be copied from earlier installation, because let's be real – that's how it's happening
Databases3 Oct 2022 | 4

Regulators might have thing or two to say. And analysts warn of post consolidation price rises
Networks3 Oct 2022 | 12

Optimus Sub-Prime? For something meant to revolutionize production lines, reveal wasn't quite there yet
AI + ML3 Oct 2022 | 25