That Firefox OS mobe: The sorta phone left behind after a mugging

Why do they bother? asks our man in Barcelona in his conference sketch

MWC 2013 Mobile World Congress - the mobile networks' annual shindig - was getting unwieldy when 10,000 attendees and exhibitors hobbled between yachts in Cannes harbour, so it was moved to Barcelona.

Last year, 70,000 attended MWC in the Spanish city, so it was moved to a new venue with twice the floor space and moving walkways between the eight cavernous halls. Unfortunately, it has fewer catering facilities than it did at Cannes. Start queuing today to get your hot dog mañana.

In the past, there would be a clear narrative each year: the struggle to define 3G or get it adopted. Then came Apple’s charge into the industry, and the industry’s response, first with lookalikes then with workalikes.

And you could always find some hopeful, and perhaps even clever, idea for a service being touted. (Clever ideas now come in floods from apps vendors who don’t need to be here nor exhibit, and so they don’t come.) But corporate vanity doesn’t diminish and given the money exhibitors spend, they're expected to make a big splash. So what we’re left with are enormous sets and only a few people ghosting about on them – a very JG Ballard picture - and some very desperate launches.

I’ll give you two: a new Sony tablet and Mozilla's Firefox OS. The latter is the umpteenth attempt by operators to "do their own platform". Telefonica stumped up the cash for this particular one. It is surely destined to meet the fate of its predecessors.

Remember LiMO, launched with over a dozen committed networks – the heart of Vodafone’s phenomenal flop Vodafone 360? Maybe you don’t. Some of these are still around, like Tizen. Or Jolla, yet another mobile OS. Jolla’s corporate mission statement is "We are Unlike". Unlike what? Gentlemen, that’s not even trying.

Any guesses on how long my enthusiasm for Firefox OS lasted?

I was prepared to put such world-weariness to one side and approach Mozilla's Linux-powered OS with fresh, naive eyes – and give it a try with the kind of puppyish enthusiasm that a blogger from an SEO-oriented run-from-the-bedroom website adopts.

I did give it a try. My puppyish enthusiasm lasted far less than five minutes. It is exactly what you’d expect from an iPhone clone in 2009 – you’re dying to say “Android”, aren’t you? But Android eventually got a bit of design polish and some decent hardware. This desperately unimaginative product won’t be bought as much as left behind after a mugging. 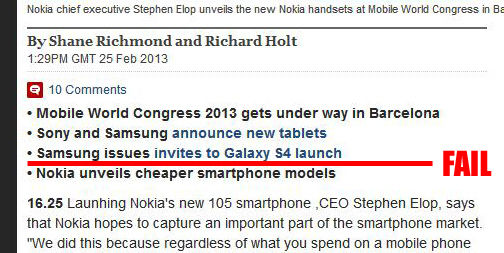 One newspaper "live blogged" MWC, and not surprisingly, came up empty

You would think that operators like Telefonica – which can afford to employ lots of clever people - would by now have drawn a chart with two lines on it: one detailing “effort expended” and the other, “success”. And then noticed that the second line is not correlating so much to the first.

But, no. I’m told that there will be even more mobile Linux action in 2013 – gladdening the hearts of Tizen and Jolla and maybe even Ubuntu - simply because the network operators fear Google so much, they’re backing every conceivable alternative, except the one that can succeed, which is Windows Phone.

What the operators have in abundance is risk-management strategists, who calculate the cost of every conceivable danger.

It’s a hangover from the state telco monopoly days. They are highly risk sensitive, which means they’re risk averse, and have strongly advised their management not do The Other Sensible Thing: which is do what Amazon did, and fork Android and takeover development of its own branch. They fear Google will change the ground rules somehow, and shaft them.

The risk wizards also mutter darkly about being stung on competition grounds if they are seen to back their own platform. God knows why, though.

None of this bothers the prospective punters in emerging markets one bit. Anyone in China who fancies an iPhone clone can wait for the "backpackman" to visit the village. When he shows up they’ll get an Android handset. They really don’t mind Google services not being there, but they do mind a complete absence of apps.

And that new Sony tablet

As for Sony’s spectacular set piece, the cause of much pre-show build up: it unveiled a tablet. It’s an Android tablet, and connects to a half-broken supply chain of entertainment, just like all the other Android tablets.

By broken I mean it’s half sane and half Mad Max territory: you can’t get everything you want in any format you want for a decent price, and it doesn’t play seamlessly. All the things Apple does within its own walled garden. So it’s all a bit of a mess. (I noticed LG was making a big deal of screen-casting – this is feeding a phone screen's video to a larger telly and making the most of what little they can actually do. It’s still in the "messing about" category.)

And Asus' hardware reveal? Two tablets actually – one’s called the FonePad and the other is the PadFone. Do you sense a bit of listlessness, here? Perhaps they ate something that Jolla was eating. Either way, the Sony Tablet and Mozilla OS were the biggest stories on the opening day of MWC 2013 and they’re entirely what you’d expect.

Of course, much more is happening in the business-to-business end of the show, but if the GSMA has ambitions for MWC to become a general tech or consumer electronics event… oh, give over.

Not everyone rents floorspace to be seen. Accenture has a huge blue sealed box, the size of a football pitch, with a tiny and very heavily guarded entrance on one side. People go in. They don’t seem to come out. What’s going on in there? Can anyone guess?

The on-site catering situation here is so desperate that by mid-week the Red Cross will be dropping food parcels, or the attendees will start eating each other. Perhaps that’s where Accenture comes in. Now that would be very JG Ballard. Perhaps it isn’t only entrepreneurs who taste like chicken. ®