The other day, a friend sent me a Picasa link to photos he'd taken at a recent vintage motorcycle show. It was a wide ranging display of classic engineering imagination put to work to power a rider on two wheels. Similarly, it’s those variations on a theme that Windows 8 has spurred among mainstream computer makers, as they all have a stab at producing the quintessential convertible laptop. And much like the efforts of those early motorcycle pioneers, it seems that nobody’s quite sure how you make a laptop and a tablet work together. After all, if they knew, they’d all be doing it the same way, surely? 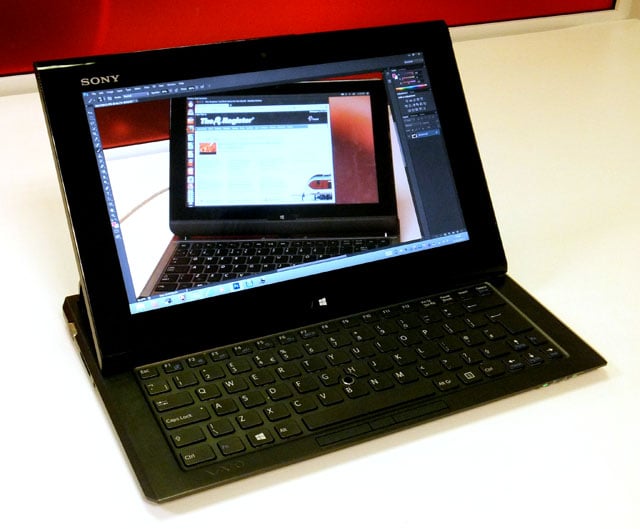 Sony’s take with the Vaio Duo 11 is to have a screen that elevates as you slide it from tablet mode to reveal its dinky keyboard. There’s no trackpad though, just an optical TrackPoint controller – think recent BlackBerrys – and a slither of buttons for left/centre/right clicks beneath the spacebar. Given the display is a touchscreen, Sony almost gets away with it, but having full HD 1920 x 1080 on an 11.6-inch screen demands some pretty accurate poking at times, so for good measure, a stylus is included too. Is this helpful or distracting? I’ll get back to you on that.

Unlike an ARM tablet, the Intel CPU needs vents

Is this the new exec must-have machine that can knock out a presentation on the boardroom projector and slum it as a slate in the coffee shop too? Sony must hope so, and as it’s also equipped with two USB 3.0 ports, HDMI and an SD/Memory Stick slot, it can easily accommodate peripherals back at the office if the point and flick fiddle factor proves wearing. Oh, and what’s this round the back? Gigabit Ethernet. Now you’re talking.

Like all these convertibles, the power button is along the edge, which is all very well in tablet mode, but a bit of a grope when waking it up from sleep as a laptop. A design compromise shows itself early on when typing, as you realise that the screen angle is fixed. Again, Sony reminisces by including flip out feet that, like keyboards from a bygone era, raise the back of the machine altering the tilt of the keys and screen at the same time.

Adding feet to the base seems a bit of an afterthought

Being an 11.6-inch machine, the keyboard is a little cramped along its length, although there is a decent amount of space between the chiclet keys, which sport an auto sensing backlight. What you perhaps won’t have bargained for is that the keyboard is also cramped from front to back, or at least it feels that way as there are no palm rests here. The space that would normally exist for such has been taken up by the deckchair prop stand arrangement keeping the screen upright.

As with all condensed keyboard configurations, spend any time on them and you get used to the quirks. The Vaio Duo 11’s keys are comfortable enough, if a little on the wobbly side, but I spent a day typing solidly on this machine and, repeatedly, hit the arrow keys instead of the right shift key. I was tempted to plug in a mouse too, but persevered with the TrackPoint, frequently giving in and using the touchscreen instead – it’s what it’s there for, after all. 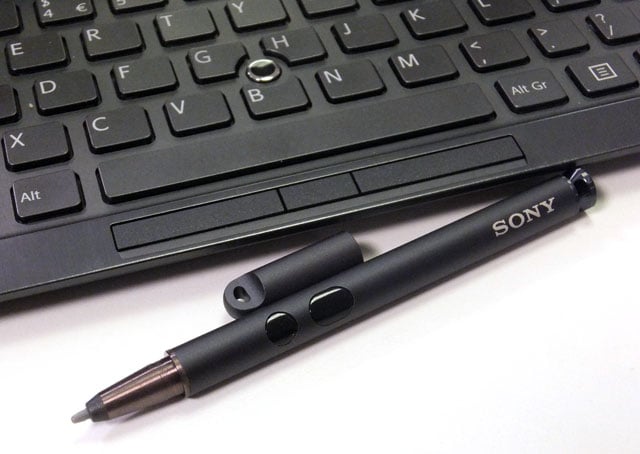 There's no trackpad so you've choices of stylus, TrackPoint and touchscreen, of course

The main problem for me was highlighting text to cut and paste in WordPad – your finger gets in the way for a start which makes it difficult to be specific. Beyond a click and TrackPoint trace, Sony’s aid for its incumbent OS choice is to use its VGP-STD1 stylus – it even has left and right click controls, but this wireless device seems to have a mind of its own. There is some proximity sensing going on here, much like on the Samsung Galaxy Note, so you don’t have to press on the screen for some tasks as you hover above with a pinpoint cursor, but it was so wayward when navigating the desktop, it was unuseable.