Trekkies have seized a poll in which the public voted on names for two of Pluto's moons - ensuring a winning moniker is Vulcan.

With William Shatner on the case, it was perhaps a foregone conclusion that Vulcan would be the clear winner in the contest, with 174,062 votes. Runner-up mythical hound Cerberus (aka Fluffy in Harry Potter and the Philosopher's Stone), which got 99,432 nods, will be the name of the second moon.

Captain Kirk was pleased with the results, which he orchestrated by suggesting Vulcan and Romulus as possible names to his 1.3 million Twitter followers. He tweeted:

174,062 votes and Vulcan came out on top of the voting for the naming of Pluto's moons. Thank you to all who voted! MBB

Spock, aka Leonard Nimoy, was also chuffed that his logic-loving homeworld was top of the poll, tweeting:

"Vulcan" is the logical choice. LLAP

The SETI Institute was responsible for the "Pluto Rocks Poll", which put 21 potential names for Pluto's P4 and P5 moons to the public vote. Vulcan was a late addition to the list and only made the list as it's also the name of the god of fire in Roman mythology. Romulus wasn't accepted because along with its twin mythological brother Remus, it gives its name to two moons that orbit main-belt asteroid 87 Sylvia (Rhea Silvia was the twins' mum in the Roman foundation fable).

"Vulcan is the Roman god of lava and smoke, and the nephew of Pluto. (Any connection to the Star Trek TV series is purely coincidental, although we can be sure that Gene Roddenberry read the classics)," wrote SETI scientist Mark Showalter in a blog officially adding the name to the list. "Thanks to William Shatner for the suggestion!" 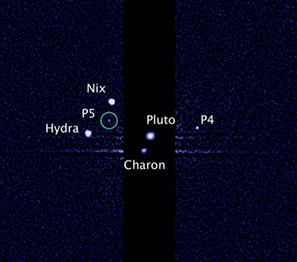 But there's no guarantee that either voted name will pass muster with the International Astronomical Union (IAU), which has the final say in what the moons are called.

While Vulcan snuck in under the wire as a mythological name, it's perhaps not the most apt of names for a Pluto moon. Given that Vulcan is a fiery god, some have said the name would be more appropriate for a hot planet than an icy moon.

There's also the fact that the typical naming structure - as in the case of R&R and their mum - requires mythological relationships between related celestial bodies' names. Although Vulcan is a nephew of Pluto, in a typically tenuous god-myth connection, the moon is not as close to Pluto as the god of the underworld's other moons. One might ask why work colleague Charon and guard snake Hydra would be closer to Pluto than his nephew?

Charon, the first of the moons to be identified back in 1978, is named after the ferryman of the Greek and Roman underworld who takes the dead across the rivers Styx and Acheron to Pluto's realm. Pluto's other moons were discovered in 2005 and named Nix and Hydra after Charon's mother and the nine-headed serpent that guarded the gate to Hades respectively.

Both Vulcan and Cerberus may also fail to make the grade because they are already the names of stuff in space. Cerberus is an asteroid, although Showalter has suggested that the IAU could get around that problem by using the alternate spelling Kerberos from the Greek for the moon. Vulcan was the name of a planet or planetoid that astronomers once believed was orbiting the Sun inside the orbit of Mercury.

However, although the poll wasn't the decider, the IAU has promised to take the public's opinion into consideration. ®