NuStar boffins peek through the clouds at NGC 1365

NuStar – the X-ray telescope launched by NASA last year – is turning in its first science with measurements revealing that the outer edges of the NGC 1365 black hole are spinning at 84 percent of light-speed or more.

The supermassive black hole in the NGC 1365 galaxy has a mass more than two million times that of the sun, but it’s the measurement of its accretion disk’s spin rate that’s impressive here.

There was already a suspicion, gleaned through observations made by the European XMM-Newton space telescope, that the black hole was something special. However, as the NuStar announcement states, estimates of the object’s spin rate may have been distorted by the huge amount of dust in the galaxy.

As matter in the accretion disk of a black hole falls in, it gives off X-rays; and the more massive the black hole, the smaller the accretion disk. This, in turn, means the X-rays are emitted from a spot closer to the gravity well, and therefore suffer more distortion.

Looking at NGC 1365, the astronomers focussed on X-rays emitted by iron in the accretion disk, combining observations from NuStar with others from Europe’s XMM-Newton space telescope. 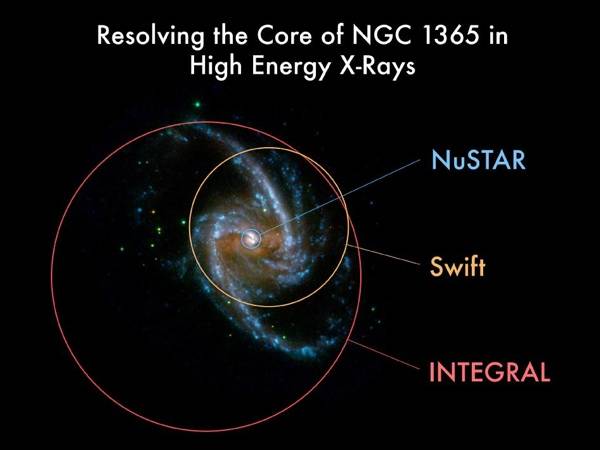 “With help from XMM-Newton, NuSTAR was able to see a broader range of X-ray energies and penetrate deeper into the region around the black hole. The new data demonstrate that X-rays are not being warped by the clouds, but by the tremendous gravity of the black hole,” the statement says.

With these more accurate measurements of the emitted X-rays, the astronomers were able to measure the Doppler effect caused by the black-hole’s rotation, revealing its relativistic speed. If The Register understands the detail in the astronomers’ paper in Nature (abstract here) correctly, the upper limit for the spin rate could be as much as 97 percent of light-speed.

As Phil Plait discusses here, there are a couple of possible explanations for the unbelievable speed: the black hole may simply have swallowed lots of matter that arrived at the right angle to add to its angular momentum; or a galactic collision could have turned two black holes into one with a huge boost to the spin on its accretion disk.

NASA has a set of visuals and videos here. ®