Spline of the times

Antique Code Show The summer of 1995, I remember it well. I was but a slip of lad at the time, slightly console obsessed perhaps, but about to embark on a period of PC gaming that would put me at the forefront of cutting-edge videogame technology, nearly bankrupting my parents as I went.

It was my birthday and I’d just finished hooking up my brand new Pentium 60 – oh yes indeed; take that, 486 – and was looking forward to a day spent on my new purchases: Star Wars: Dark Forces, Ecstatica and, ever late to the party, the game having released in 1994, SimCity 2000.

Looking back, I’m still unsure as to how I convinced my dad of the ‘educational’ benefits of my ninja rig. Perhaps he’d long since given up hope of having a child who was captain of the school football team? But regardless, here I was, only a boot disk away from gaming nirvana.

As a veteran of SimCity, I was confident of donning my mayoral crown once more ahead of creating yet another model town. What I hadn’t reckoned on were the changes – every one an improvement – which would mean re-learning the art of city design all over again.

Before getting to the gameplay, however, perhaps a history lesson is in order. After designing the surprise success story that was 1989’s SimCity, developer Will Wright and publisher Maxis next looked to expand the ‘Sim’ series still further, so spawning the likes of SimEarth, SimFarm and SimAnt, each of which was greeted with less enthusiasm than its forebear.

Keen to rekindle that previous level of success, Wright and Maxis looked to bring out the big gun once again, and so SimCity 2000, the true successor to SimCity was born. Wooing fans with a much larger area to develop, a vastly more diverse range of building types and an infinitely more interesting visual engine designed to better replicate the look and feel of a real city.

Starting up the game immediately presented you with two options, the first being to select a time period – one of 1900, 1950, 2000 or 2050 – while the second asked you to pick a difficulty setting which directly affected your initial capital. It was the former option, however, which was the most eye-catching, particularly when it became obvious that a 1900 city would actually move through the years, modernising and evolving as it went. 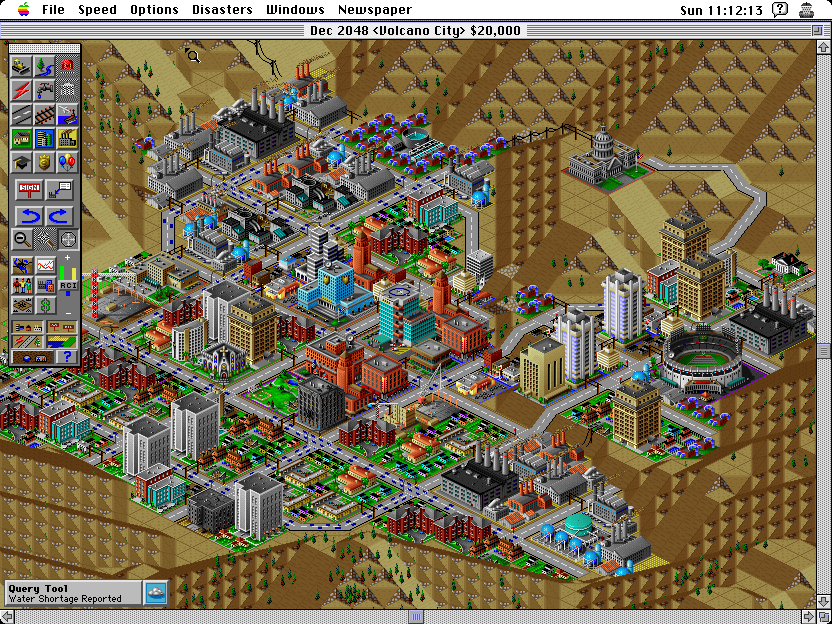 Brilliantly there was even a constant stream of new one-off building purchases which evolved along similar lines. First the chance to zone airports becoming available as you reached 1950, next a nuclear power plant unlocking at around 1980, before eventually the entirely sci-fi microwave power plant and 'arcologies' made their presence known.

It was the latter which was to offer some kind of endgame to the standard SimCity experience. Arcologies essentially consisting of residential domes grafted onto rocket blasters that would launch huge chunks of your population into space, as your citizens rushed off to explore the final frontier. A scenario somewhat comparable to winning the Space Race in a game of Civilization.

Next page: Splines, of the reticulating variety
Page: