The number of students forced to "intern" on iPhone assembly lines has increased, says a new report from a China-based labour rights watchdog.

The report 'Apple Fails in its Responsibility to Monitor Suppliers', published on 26 February by Students and Scholars Against Corporate Misbehaviour (SACOM) also says that Apple manufacturers have "intensified military style management" for conveyor belt workers.

An Apple spokesperson told The Register that Apple is making progress in the goals laid out in the Supplier Code of Conduct it released last year.

Based on its interviews with 130 workers in three factories that made USB cables and iPhone and iPad cases, SACOM says that some conditions have actually worsened for the people piecing together the computer components since Apple released its Supplier Code of Conduct last year. 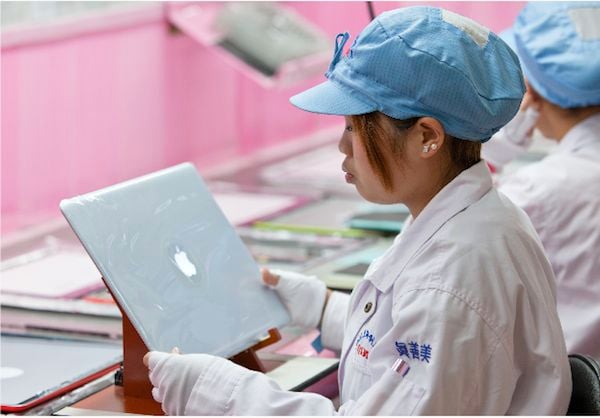 The report added that in the three factories run by Pegatron, Wintek and Foxlink there had been an increasing use of students and factory floor "interns" - which meant that up to 80 per cent of the workforce were itinerant workers with fewer rights and lower incentive to organise for better treatment. Deals between universities and factories means that students are often required to complete a spell fitting iPhone parts on low pay as a compulsory part of passing their degree.

The long working hours, unachievable production quotas, and alleged unpaid overtime work has driven workers from Apple suppliers and accelerated the turnover rate, which in turn, has compelled Apple suppliers to depend heavily on labor agencies to recruit an increasing number of dispatch workers (in one case, a labor agency recruited up to 1000 workers a day). In addition, dispatch labor is deprived of the benefits that regular, full-time workers are entitled to. Overall, labor conditions are deteriorating, both for regular workers and dispatch workers

Other findings in the Sacom report showed the persistence of previously identified problems - with long weeks of 70 to 100 hours and infringements on worker privilege including requesting workers to turn up to work for meetings before work, cutting meal times and limits on bathroom breaks.

Apple hit back at the allegations, citing its latest audit into supply chain responsibility that claims success in tackling core issues such as work hours: finding an average of 92 per cent compliance with a maximum 60-hour work week. Apple stressed the large extent of its auditing process: and claims it is now tracking more than 1 million workers weekly and publishing the results monthly on its website.

Apple also promised action on the student intern issue, stating that in 2013 it will require factories to provide the number of student workers along with school affiliations so we can monitor this issue more carefully.

The Apple spokesperson also sent The Register a link to an article about Samsung's supply chain and complaints about child workers in French paper Le Parisien. Deflecting much? ®