My helpful GNOMES will slay these PEERS

What is a vanguard role? It means taking the lead
- Enver Hoxha

A New Britain is emerging - thanks to Conservative 2.0 and its Digital by Default thinking. The old elites based on profits, exports and industry and R&D are falling by the wayside as a new profitless digital economy internet startup, based on fun (and catapults), emerges like a Chillaxing Phoenix above Silicon Roundabout.

This week, a great emblem of the post-profit digital economy and champion of entrepreneurs, Martha Lane Fox, was catapulted into Westminster, to DISRUPT the House of Lords. Arise, Baroness Fox of Soho! The rest of you can practice your curtseys.

This is something Mr Orlowski here at The Registrar recommended in 2009 - and while he gets everything else about the New Digital Economy horridly wrong, he called it right here.

There are many reasons to admire Baroness Fox.

Martha has had to overcome two handicaps to get where she is today: she was born into great wealth and is very well connected. Anyone who can endure the brutalising ghettos of Westminster School and Magdelen College, Oxford to rise to the boards of Marks and Spencer and Channel 4 deserves our admiration. She has literally clawed her way from side to side at the top, like some kind of digital lady crab.

No wonder she feels such affinity with people on "horrible council estates" and who need to see the magic of the web. And she's right when she says we need to get out our Tasers, and set them to TOUGH LOVE mode. If you don't use FourSquare or Pinterest, which are digital and so are better than democracy and are replacing it, you're going to need a personal engagement strategy pronto. Or Lord Fox will be after you.

Now, I can't possibly talk about it yet, but I have some news to announce.

Martha is merely the blonde prong of the revolutionary vanguard, however. Martha will soon be joined by two more visionaries: Lord Hammersley and Lord Armstrong. 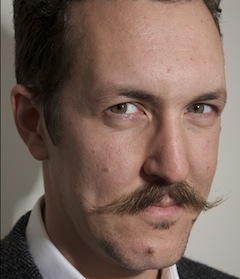 Today, he's just an Ambassador to Silicon Roundabout. Tomorrow, this brilliant man could be sitting on your wool sack

Lord Hammersley already holds a senior post in the diplomatic service: he's No.10's Ambassador to Silicon Roundabout. That shows just how far ahead the new generation of digital Conservatives are: they appoint ambassadors to places which aren't countries, but which are more important than countries. No.10 has been absorbing Ben's wisdom, including his brilliant observation that: "A doctor is just a very well trained flow chart." Wise words, and I for one can't wait for surgeons to be replaced by Javascript functions programmed by 11-year-olds on a Raspberry Pi.

Lord Armstrong will be another exciting elevation to the Upper Chamber. My dear friend and skiing buddy Charles created a "new kind of working environment designed to support a new generation of creative enterprises" in Shoreditch.

A year ago there was just one Trampery.

But soon there will be four Tramperys. From one to four in just a year - that's a 16,000 per cent increase [มาลัย - please check, Steve] - and a massive vindiation of Conserative 2.0's industrial strategy. Real Britain may be languishing in austerity, but Digital Britain is booming, once you start using the vital chillaxing metric.

It is necessary that the benches must first be cleared of dead wood: the existing Lordships. The tree of digital liberty must be fed by the blood of the industrialists and the copyright holders, as my pal John Perry Barlow says. Then, and only then, can Lord Bong take his rightful place on the Sack of Wool. But how will this happen?

A clue was in a newspaper feature on Charles this week. I draw your attention to the last line. 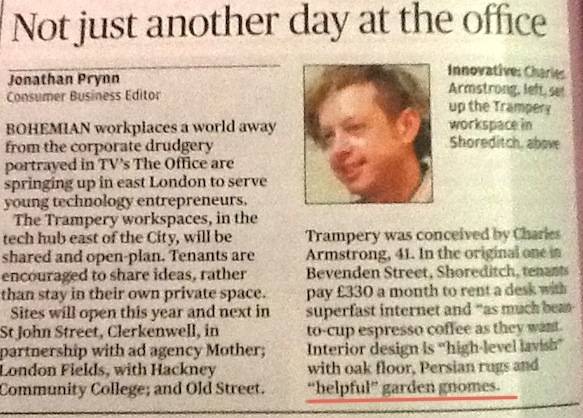 My message to the Lordships is this: don't even think about fighting the Helpful Gnomes. You can't win. Make your way to the Exit and Surrender your wig to the Most Helpful Gnome. You will receive a Reorientation Pack in return.

Finally, there remains one final formality: the territorial designation. The designation of "Lord Shoreditch" is already taken, and our efforts to persuade the present incumbent to participate in a charity bungee jump from the top of his designer apartment have so far been unsuccessful. So I cannot be Lord Bong of Shoreditch. At least, not yet.

But thanks to my assistant มาลัย (which means 'Garland of Flowers' in Thai) there is a solution.

Silicon Roundabout isn't a nation state, but it can still get an Ambassador. That's because it is a state of mind. Likewise, a "Business Model" has nothing to do with ever making a profit, or ever being in business, really - and nobody who ever uses the phrase ever will make a profit. Therefore "business model", too, is also a state of mind - a rather optimistic state of mind.

I will therefore be: Lord Bong of Disruptive Business Model, a State of Mind.

Steve Bong is the founder of Bong Ventures, an early stage investor and incubator focussing on innovative new technology start-ups based in Shoreditch, London. When he's not helping rear the next generation of business models, Steve enjoys parties, foreign travel, extreme cuisine, Open Data and draws his inspiration from Ayn Rand and His Holiness the 14th Dalai Lama. He advises No.10 policy guru Rahul Sativa on mindfulness and innovation, Mark Zuckerberg on the Perfect IPO, the Republic of Kazakhstan on emergent social media strategies, LOCOG on brand enforcement, and imagineered the Olympic Opening Ceremony with Danny Boyle. He wants to pivot the BBC into the 22nd Century, and favours Small Government but Large Catapults.