For over fifty years schoolbooks have been teaching about the Van Allen belts, two torus-shaped zones of charged particles that encircle the Earth. Now, a NASA mission has discovered that there is a third – but only when conditions are right. 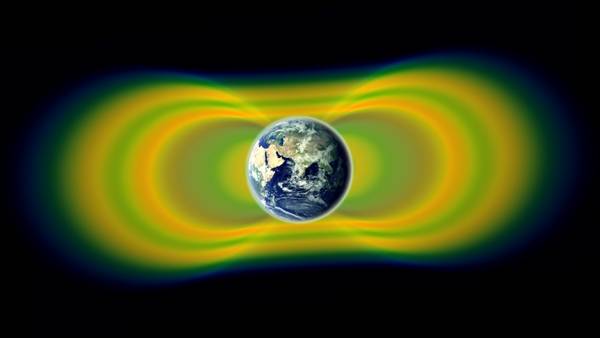 Three belts for the price of two

Last August, NASA fired a pair of Radiation Belt Storm Probes (RBSP) into the belts to do the most detailed study yet of their composition. The spacecraft, heavily shielded to function in the plasma belts, were scheduled to start booting up their equipment in slow and steady progression – witness how long Curiosity was on the Surface of Mars before all her systems were used.

But the team decided to turn on the Relativistic Electron Proton Telescope (REPT) early, three days into the flight, so that it could match data with another NASA probe – the Solar, Anomalous, and Magnetospheric Particle Explorer (SAMPEX) which was falling back towards Earth. When the data came in, the third belt was revealed.

"By the fifth day REPT was on, we could plot out our observations and watch the formation of a third radiation belt," said Shri Kanekal, the deputy mission scientist for the probes at NASA's Goddard Space Flight Center. "

"We started wondering if there was something wrong with our instruments. We checked everything, but there was nothing wrong with them. The third belt persisted beautifully, day after day, week after week, for four weeks."

While it is known that the inner Van Allen belt swells slightly, and the outer one more massively, this third ring is a surprise. Then again, scientists still aren't 100 per cent sure what makes the rings grow and shrink anyway, since their size is only partially attributable to the Sun's output.

In a paper in the journal Science, the team postulates that part of the expansion of the Van Allen belts is down to a solar flare that erupted from Sol's surface on August 31, the day after the launch. The filament of plasma, which was spotted by NASA's Solar Dynamics Observatory, sent a stream of particles and a shock wave towards Earth, and this may have energized the third layer.

"We can offer these new observations to the theorists who model what's going on in the belts," said Kanekal. "Nature presents us with this event – it's there, it's a fact, you can't argue with it – and now we have to explain why it's the case. Why did the third belt persist for four weeks? Why does it change? All of this information teaches us more about space." 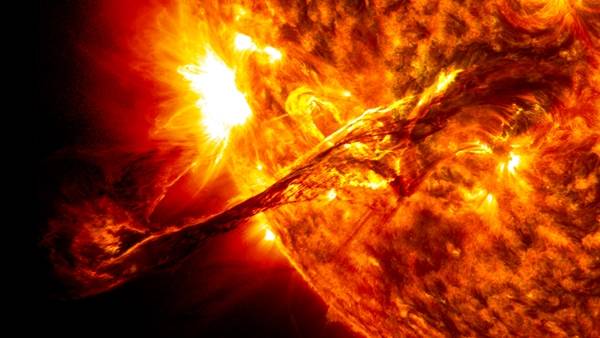 This flare may have kicked off the extra belt

The belts were discovered when the US lofted its first satellite, Explorer 1, back in 1958, and were named after the scientist James Van Allen who built the cosmic ray detector that picked them up. Van Allen was one of the very first space scientists, and made some of the early measurements of the upper atmosphere in 1946 using captured German V-2 rockets.

Van Allen grew more and more fascinated with the research, and developed innovative ways to carry it on. He is the co-creator of the Rockoon, an early solid-state rocket that was hoisted to 70,000 feet by a helium balloon and then fired automatically by a clockwork control system. Rockoons are still used today, not least by El Reg's Special Projects Bureau's team to send LOHAN thrusting into the sky.

The belts that bear his name are a problem in more ways than one. They increase the failure rate for satellites and probes that go through them, as well as harming astronauts. Van Allen himself said that the presence of the belts, and the myriad of other things that can go wrong on a manned space flight, should stop humans leaving orbit.

"In a dispassionate comparison of the relative values of human and robotic spaceflight, the only surviving motivation for continuing human spaceflight is the ideology of adventure," he said.

"At the end of the day, I ask myself whether the huge national commitment of technical talent to human spaceflight and the ever-present potential for the loss of precious human life are really justifiable."

Such comments have been picked apart (and occasionally shuffled around) to help reinforce one of the central tenets of the "We never went to the Moon" movement: that humans couldn't possibly make it through the belts alive. This latest discovery, that they could be more extensive than first thought, could add fuel for the fool's fire.

Van Allen himself rubbished such claims, pointing out that at the speed the astronauts were going they went through the belts in four hours and received no more radiation than they would living at sea level for three years.

In fact, the Van Allen belts actually confirm we did make it out of Earth's orbit. All but three of the Apollo astronauts who went out to the Moon have since developed cataracts earlier than expected as a result of their exposure to cosmic rays.

Still, when have deniers ever let science get in the way of a good conspiracy theory? ®