Tito's Mars mission to use HUMAN WASTE as radiation shield

The team behind a planned private manned mission to Mars say they've come up with a way to protect voyagers from radiation exposure during the long trip: pack the walls of the spacecraft with a layer of the astronauts' own waste.

Tito first announced his plans to send humans to the Red Planet in February, claiming that he will launch a spacecraft in 2018 that will travel to within 100 miles of the surface of Mars before using a fortuitous confluence of gravitational forces to slingshot itself back to Earth.

Even such a brief fly-by of Mars would take at least 17 months, however, which is a long time for humans to be away from the protective covering of Earth's atmosphere.

According to the National Space Biomedical Research Institute, astronauts exposed to heightened radiation levels in outer space risk a variety of health problems, including nausea, fatigue, skin injury, changes in white blood cell counts and the immune system, and – over the longer term – damage to the eyes, lungs, gastrointestinal tract, and central nervous system.

In other words, a 17-month-long dose of space radiation would be seriously bad news.

The good news, though, is that water and organic materials can both be effective shields against radiation exposure, and any manned space voyage will necessarily involve plenty of both.

MacCallum said the Inspiration Mars spacecraft could leave Earth with its walls lined with bags of drinking water and food. Then, as the astronauts consume these provisions over time, the empty bags could be replaced with others that the craft's occupants had filled with solid and liquid human waste. 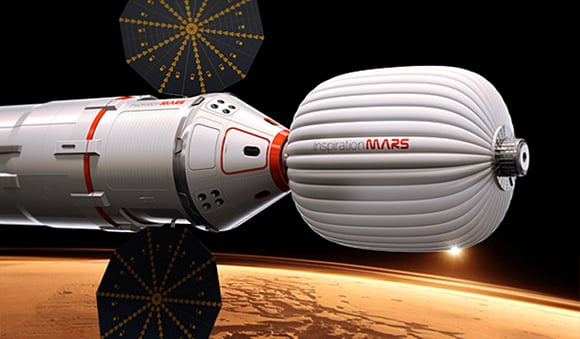 NASA is already working on a system that uses osmosis to separate clean, drinkable water from urine. MacCallum proposes that a similar system could be used to extract moisture from feces, as well.

"Dehydrate them as much as possible, because we need to get the water back," MacCallum said. "Those solid waste products get put into a bag, put right back against the wall."

Based on the current Inspiration Mars designs, those bags of water and waste will give the astronauts a 40cm-thick shield surrounding the craft, which should be enough to cut down the background radiation of space to tolerable levels.

It won't be enough to block the kind of severe radiation spike the Mars voyagers would face in the event of a solar flare, however. MacCallum says the Inspiration Mars spacecraft should be able to keep the upper rocket stage of its launch vehicle pointed toward the Sun to provide some protection, should a flare occur – but there are no guarantees.

Radiation isn't the only risk the potential Mars astronauts will have to contend with, either. There are other health issues to consider, such as bone loss and muscle atrophy, and there are psychological concerns, too.

In February, Tito said that he would like his astronauts to be a couple, preferably married, to help offset some of the psychological difficulties. But it's unclear whether there will be any way to shake off the dread that comes when you realize you're hurtling through outer space in the world's largest – and, eventually, fullest – portable toilet. ®