Hooch 'brings forth a whole world of harm'

A broad coalition of UK health organizations has released a report detailing the evils of demon rum (and whisky, vodka, brandy, gin, lager, ale, wine, et al.), and calling for a series of government actions to suppress its use, including sharply increased pricing and a ban on alcohol advertising and sponsorships.

"In developing this strategy, we considered the best available evidence about appropriate policies and interventions that are needed both to reduce drinking levels in individuals and reduce the damage to families and communities that alcohol can cause," said Sir Ian Gilmore, chairman of the Alcohol Health Alliance, when announcing the report, entitled "Health First: An evidence-based alcohol strategy for the UK".

"The pleasure of alcohol, for those who choose to drink, is clear," the report admits, but its very next sentence expresses the alarm that pervades the entire 55-page document: "Yet alcohol also brings forth a whole world of harm."

That world of harm is an expensive place, the report contends. "The personal, social and economic cost of alcohol has been estimated to be up to £55bn per year for England and £7.5bn for Scotland," it claims.

The Reg is tempted to remark that such a litany of horrors is enough to drive a man to drink, but we have too much sophistication to stoop to such a glib cliché.

The report focuses its strategies for reducing alcohol consumption on what it calls the "four Ps" of marketing – price, product, promotion, and place. Of those, price is paramount. "The simplest way to reduce demand for alcohol," the report argues, "is to put the price up. Like most consumer products, demand for alcohol is inversely related to its price." 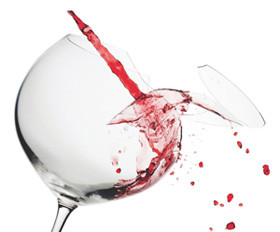 The report's cover wastes a perfectly good glass of wine

Advertising takes its lumps, as well. "The pervasive marketing of alcohol products in the UK is indefensible," the report asserts. "Only a complete ban on all alcohol advertising and sponsorship will make a lasting difference."

"Health First" makes 30 specific recommendations intended to curtail alcohol use, ranging from "forward planning" of the number, density, and opening hours of all licensed watering holes, to random breath-testing of drivers, to eliminating "happy hours". Of those 30, it elevates selected recommendations to its "Top Ten", as follows:

The report's recommendations may sound draconian to some, but "Health First" argues that the majority of the public is on the authors' side, citing a 2012 survey conducted by the UK polling organization YouGov.

"The British people may have a long-standing relationship with alcohol," the report notes, "but this does not blind them to the harms that it causes: 61 per cent of respondents said that they thought this relationship is unhealthy." The highest percentage of "unhealthy" respondents, by the way, was in Northern Ireland and Scotland, where the report said "alcohol consumption per capita is relatively high."

In addition, 92 per cent thought that alcohol had "a great deal" or "a fair amount" of impact on disorderly and anti-social behavior, 67 per cent agreed that is was important to conduct promotional campaigns to raise awareness of the harms of alcohol, and 57 per cent said that alcohol products should be required to include warning labels.

When it came to increasing the price of alcohol, however, the public balked. Only 35 per cent said that drinks should be more expensive, and 22 per cent thought they should instead be cheaper.

The authors of "Health First" are undaunted by this public reluctance. "We need to be ambitious not only in tackling the price of alcohol," they write in their summary, "but also in regulating alcohol products, eliminating alcohol promotion and controlling the overall availability of alcohol in our communities." ®

Customers 'becoming impatient' to get 'clarity' on the matter, says exec
Systems6 Jul 2022 | 13