NetApp could use Microsoft to beat off VMware's virtual tool

You're not the only one with a VSA, you know

Blocks and Files Let's think about putting some storage Lego bricks together in a new combination. The bricks are labelled NetApp, DataONTAP, ONTAP EDGE, VSA, VMware and Hyper-V.

A VSA is a virtual storage appliance - with storage array controller software running as a virtual machine and turning the host server's local disks into a shared storage facility, a virtual SAN. NetApp has crafted a version of Data ONTAP, its FAS array operating system, called ONTAP Edge, and this is a VSA running under VMware which NetApp positions as a remote office facility. It's also completely in tune with the software-defined storage idea.

Edge runs ONTAP-V and has native dedupe, FlexClone, SnapVault, SnapRestore and SnapMirror software so the remote office can be backed up from a central data centre. It also has virtual volumes management system FlexVols. 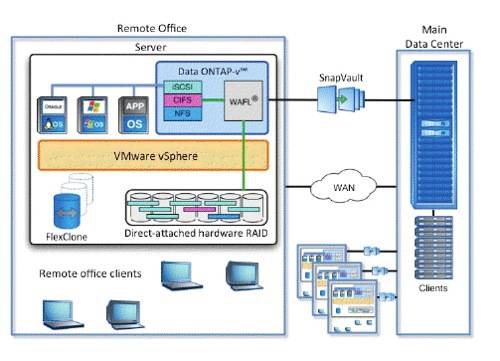 There are two obvious ways we can go from here. One is to head towards the data centre and make Edge more capable - give it clustering and high availability for example, and enable it to use server flash as a cache to speed things up: so that it becomes a sort of Edge FlashCache.

Another thing to do would be to give it Hyper-V support. Oz colleague Simon Sharwood heard from Val Bercovici in NetApp's CTO office that NetApp is working to make BSD Unix a better Hyper-V guest. ONTAP is based on BSD.

Here's the leap: let's put ONTAP Edge into Hyper-V giving it - and hence Windows Server - a NetApp VSA. This could have FlexPod effects as Hyper-V is used in some FlexPod/ExpressPod configurations and an ONTAP VSA in FlexPods would enable lower cost configurations - particularly attractive in lower-cost ExpressPod land, branch office ExpressPods for example.

We understand ExpressPods that are using Hyper-V and, separately at present, ONTAP Edge, will be available later this year.

A Hyper-V version of ONTAP Edge could take advantage of NetApp's SnapManager for Hyper-V.

It would also provide a hedge against VMware's own VSA ambitions; witness its Virsto acquisition.

We anticipate ONTAP Edge for Hyper-V could come out later this year, and that high availability, clustering and server flash cache usage will follow soon after. ®