Are you sure you want to be in the retail business, server makers?

The dance of Cloudy Server Limbo continues, with Amazon Web Services, the cloud computing subsidiary of e-tailing giant Amazon.com, lowering the broomstick a little closer to the floor and dancing under it with lower EC2 compute-cloud prices.

The cuts are deepest on the high-memory instances, which will help customers interested in running in-memory database and other DRAM-intensive workloads. All three modes of reserved instance pricing – light, medium, and heavy utilization – are getting price cuts in all of the AWS geographies, as shown here: 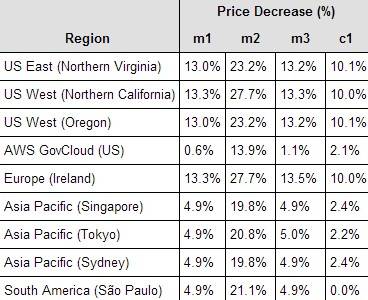 Amazon has taking the chop to EC2 reserved instances

Jeff Barr, cloud computing evangelist at AWS, said in the post that the price cuts are effective immediately, and that they can cut the cost of capacity by as much as 65 per cent compared to standard on-demand EC2 instances.

What Amazon really wants you to do is make use of its Trusted Advisor service, a diagnostics tool to help customers not waste money on capacity and services they use on AWS, which Amazon is giving free access to during March.

Amazon announced the ability to reserve EC2 instances on its cloud back in March 2009, which helped both AWS and its customers do better capacity planning. In exchange for predictability in usage on the EC2 cloud and with a modest one-time fee, Amazon cut the price.

Amazon is well used to living on pennies on the dollar – or, sometimes, just a single penny. The question is whether or not Rackspace Hosting, Google, and Microsoft are willing to live on such low margins, and the answer is they might be able to, but they don't want to be.

And while IBM, HP, and Dell think they are in the same business as AWS with their respective public clouds, they are trying to compete with their brands and supposed IT management skills and customer relationships more than they are trying to compete with Amazon on price. And the reason is simple: their pricing options are less sophisticated and they are higher – at least at list price.

The upshot is that IBM, HP, and Dell can build their own infrastructure and sell it at cost to their public clouds, so in theory, at least, they could try to compete on price. Pity the poor service providers who won't be able to do that as they build their clouds. Small wonder, then, that Rackspace Hosting is building its own servers and cutting out the middleman.

Google and Microsoft have plenty enough deep pockets to play Cloudy Server Limbo and keep crouching lower as each new AWS price cut comes around, so you can expect them to have reactionary price cuts pretty promptly. ®