The UK will bung £88m towards the European Southern Observatory's £1bn project to build the world's largest telescope. The cash injection is on top of Blighty's annual £18m contribution to the ESO.

Construction of the ground-based European Extremely Large Telescope is underway and is expected to take ten years to complete. We're told the enormo-contraption will produce images 16 times sharper than the Hubble space 'scope, and should help answer some of the biggest questions facing modern astronomy. 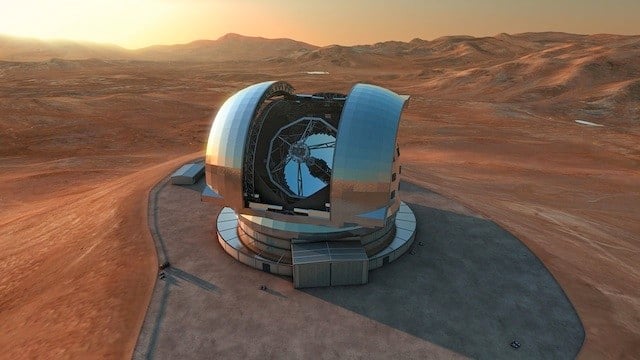 What the European Extremely Large Telescope is expected to look like

The E-ELT has a 39m-diameter primary mirror - its collection area is 47 nanoWales - and is capable of collecting at least 15 times more light than any existing telescope, we're told. The reflector-type scope is made of 798 1.4m-wide hexagonal mirror segments and features a novel design that results in exceptional image quality.

Eight projects to design special cameras and spectrographs to analyse the data collected by E-ELT are being considered. It will be capable of picking up spectrum from visible light to infrared.

Its location - 3,000m (9,800ft) up in the Cerro Armazones in Chile - allows the equipment to avoid atmospheric effects that plague lower-sited observatories. Specialised actuators, or pistons, move each individual hexagon panel to precisely control the shape of the mirror, compensating for effects on the light reaching the telescope.

Engineers are slicing off the top of the Chilean peak to get a flat surface on which to build the E-ELT, and they hope the facility will be completed by 2023.

Ground telescopes are a major priority for astronomers, who use them to study planets and their stars, the "first objects" in the universe, super-massive black holes, and the nature of dark matter and dark energy that dominate the universe.

Studies of the universe's first galaxies help define our understanding of the creation of the universe and the laws of physics. There's a handy cut-out-and-keep guide to the E-ELT's technology here [PDF]. ®