New IBM storage chief Ambuj Goyal: I like all-flash and I cannot lie

We'll use mutant hybrids when it's not urgent, says new broom

Just two months into the job and IBM's newest storage general manager Ambuj Goyal is putting his stamp on the business.

He told El Reg that Big Blue plans to move all transaction data away from disk to all-flash arrays; that he's not that keen on object storage; and that he envisages an IBM that sells "less storage".

He gave Vulture Central storage desk the run-down in an interview which covered flash and storage consolidation and object storage. Goyal has been making an introductory round of meetings with customers, business partners, analysts and hacks after his appointment.

Returning to the data centre flash storage topic, flash is not the death knell for IBM's primary data-storing disk drive arrays that it might seem, said the new storage chief.

Goyal said that applications running in data centre servers - be they mainframes, PowerPC or Intel servers - should not have to change to accommodate a new storage medium like flash. Instead the new medium should be accessed behind the familiar controllers so the applications see nothing different, except faster data access, said the storage chief.

Goyal has a clear focus when it comes to the IBM data centre heartland of transaction processing. The new storage chief says, "unless you understand that, you can't design the best flash systems." He added: "Our play is the all-flash array for transaction processing, not hybrids (arrays combining disk and solid state storage)." But the flash array has to fit in seamlessly from the application's viewpoint. 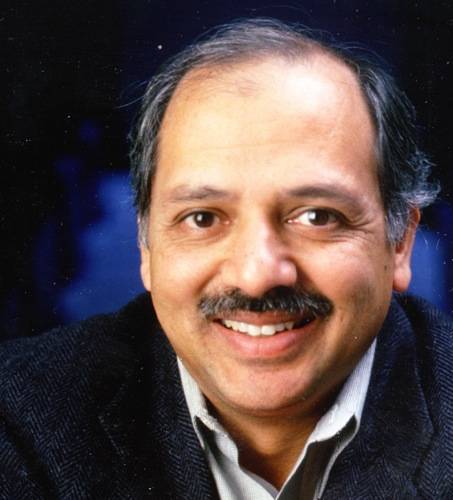 Goyal painted a picture of a high-end Unix server, a mainframe and a VMware server - each of which may connect to an IBM disk drive array such as a DS8000 or Storwize V7000. He said: "The flash array has to fit in transparently. It has to be behind the DS8000 controller," or the V7000 one come to that - meaning, in effect, an SVC (SAN Volume Controller), a SAN storage virtualising front end. We might envisage the flash array being a set of TMS RamSans.

He also suggested another use case involving a SharePoint server accessing a NAS array for files, and says IBM can put a decent controller - the SVC again - with an all-flash array behind it and by so doing eliminate the need to make changes to the application. He said: "Anything that's rip-and-replace takes a long time to be successful in the market place."

IBM will continue to provide traditional storage arrays, like the DS8000, and XIV we suppose, with all-disk or hybrid disk and solid state drives, for non-transaction data (data which requires less urgent access).

Goyal says IBM wants to enable customers to get more value from their storage. The storage market in general has too much of a storage focus and generally wants to sell more storage. He counters this; "We are going to build our strategy on selling less storage and delivering more value. We'll make a storage consolidation play." For example, IBM will talk to a customer with a 3PB storage estate and cut it in half.

He envisages a three-step process:

Our old friend the SVC is the virtualisation platform. Tivoli Storage Productivity Center is the management component. Goyal says this three-step process works both with IBM and third-party storage.

The storage chief says customers have "lots of file storage all over the place with different strategies for archive, backup and recovery." The files typically do not hold transaction data.

Customers need help to make the management easier and a rip-and-replace cure strategy won't work, he maintains. Goyal went on to explain his trickle-feed idea: "What if local application use of filers doesn't change but data is trickle-fed into a place where you can centrally manage it?"

The central data would be analysed so the overall risk of the file estate could be reduced along with its cost and size, and the trickle feed would be two-way. Goyal said: "We will build a strategy on that basis."

This will not involve file virtualisation, he insisted.

Goyal was not enthusiastic about object storage. He said he likes the idea of unified storage with both a block and file interface but can't see a role, it appears, for object storage.

We're left thinking that, in his view, transaction data should move to flash but be accessed through familiar controllers, like the SVC. File data storage is a mess and needs managing better to bring discipline and rigour and efficiency to it. Object storage has little or no role.

He said: "We have a disk business, a tape business and a flash business. ... I don't care about the media."

The new storage GM said clients need service level agreements, performance, capacity, management, etc from their storage facilities and: "I'll use the right media and technology for it." The choice is defined by the desired business outcomes and not by a desire to sell more storage product, he added. ®