Oracle revs Database Appliance to X3-2 – and nearly to Exadata

If you are looking for a server appliance that is pretuned to load an Oracle database on, then Ellison & Co have a new Database Appliance X3-2 they want to introduce you to.

Not everyone needs an Exadata database cluster that can scale to petabytes of capacity, and that's why Oracle engineered the Database Appliance for small and medium businesses a year and a half ago, as well as to give its channel partners something to peddle. This is not an Exadata Mini, but a rack-style, two-node x86 server cluster that is tuned to run Oracle 11g and soon Oracle 12c databases without muss of fuss.

The original Database Appliance, which launched in September 2011, was based on a special two-node server called the Sun Fire X4370 M2, which was essentially a pair of two-socket Xeon E5 servers using six-core X5675 processors running at 3.06GHz. Each "system controller", as the nodes are called, has an internal 500GB disk for systems software plus a dozen 3.5-inch drive bays for holding database data.

This setup cost $50,000, with premier support for the system costing $6,000. That price does not include Oracle 11g Enterprise Edition database or Real Application Clusters (RAC) extensions, which you can use to run in the database in active-active or active-passive mode. 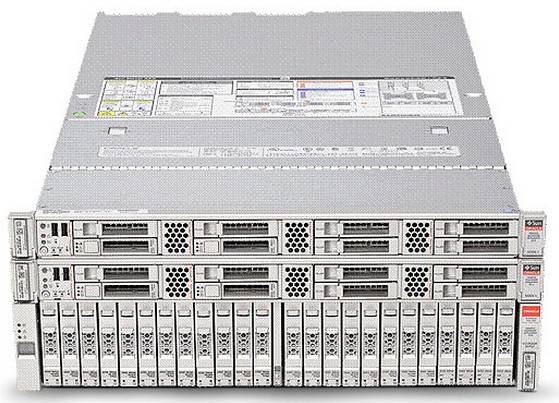 The second rev of the Oracle Database Appliance, with the X3-2 moniker

With the Database Appliance X3-2, Oracle has upgraded the underlying iron in terms of performance and capacity, while moving to stock rack servers and storage arrays instead of custom configuration. This appliance has much more oomph and considerably more storage expansion, plus some other improvements.

In each storage shelf, there are four 2.5-inch 200GB SAS-2 SLC solid-state disks (for database redo logs) and 20 2.5-inch 900GB 10K SAS-2 hard drives. Add up all the disk drives in the servers and the storage shelf and you have 18TB of raw capacity, which can be "double-mirrored" (that's Oracle's term) down to 9TB or "triple-mirrored" down to 6TB if you are a real freak about high availability.

The whole shebang in the Database Appliance X3-2 comes with Oracle Linux 5.8 installed as well as a new management tool called – what else? – Appliance Manager. You can load up Oracle's rendition of the Xen hypervisor on the server nodes if you want and carve out some CPU, memory, and I/O space if you want to run application software right on the appliance, or you can pipe database transactions out over the 10GE ports.

Oracle is offering capacity-on-demand pricing for Oracle Database 11g Enterprise Edition (at the 11.2.0.3 level) ranging from 4 to 16 cores in increments of four cores for bare metal installations (per server node), and from 2 to 16 cores in increments of two cores when it is used in virtualized mode. You have to activate the same number of cores on each node in the appliance. 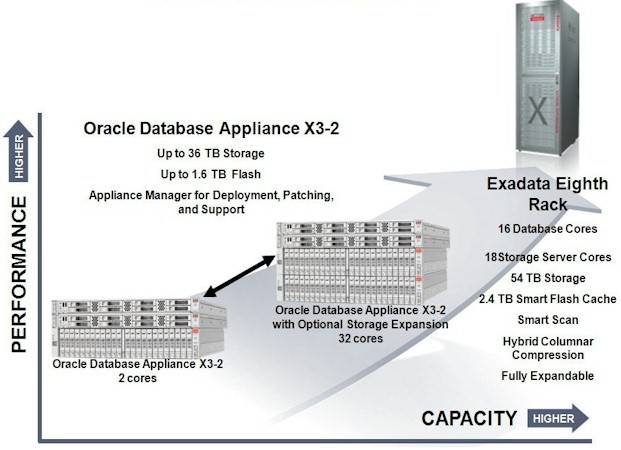 The Database Appliance X3-2 costs $60,000 including the storage shelf, with maintenance at $7,200 per year. The new appliance has 2.7 times the main memory, three times the flash capacity (to boost those database redos), and somewhere around 40 per cent more CPU performance, which Oracle says can add up to as much as a factor of 2X better database performance. The new appliance has 50 per cent more raw database storage capacity with one shelf. That's a lot more capacity on a lot of fronts for a 20 per cent increase in cost for the hardware.

If you need more storage, you can hang a storage expansion shelf off the appliance; this costs $40,000, plus another $4,900 a year for maintenance.

Still, even those prices may sound like a lot of dough for an SMB customer. But it's a lot less than what it costs to buy an eighth-rack of an Exadata cluster, which launched last October when the fourth generation Exadata machines, the X3-2 and X3-8, debuted.

This eighth-rack Exadata X3-2 setup has sixteen Xeon E5 cores with 54TB of disk capacity and 2.4TB of Smart Flash server-side PCI-Express flash memory for $200,000, plus $24,000 a year for support. That does not include the cost of Exadata storage caching and columnar data compression software, the Oracle 11g database, or RAC clustering. At a lot of SMBs, that is the IT budget for the year, once you configure the software on it.

To be sure, the Oracle Appliance X3-2 costs a lot less, but core-for-core and disk-for-disk, it stands to reason that with Exadata compression software, the baby Exadata X3-2 machine does a lot more work for the money.

But if you are an SMB with modest workloads, none of that matters anyway. What Oracle really needed to do was put the Exadata software on a couple of cores in the database appliance and make it scream. Maybe that will come with the Database Appliance X4-2. ®