With the spotlight on its very latest Visual Networking Index forecasts for mobile data, The Register is interested to note that Cisco has actually trimmed the five-year growth rate for Australian mobile data consumption.

In its 2011 to 2016 VNI, Cisco was predicting a compound annual growth rate of 68 percent, with the country's mobile data forecast to reach 119 petabytes per month at the end of the forecast period.

In the new forecast, the rate is a still-impressive but substantially lower CAGR of 43 percent from 2012 to 2017.

The data throughput metrics are also substantially revised, with the forecast now ending at 75.7 Terabytes per month instead of reaching into the petabytes.

By comparison, while the Australian Bureau of Statistics doesn't provide forecasts for mobile data, its historical data for the three months to June 2012 reported 25,301 Terabytes of downloads across the market, or around 8,333 TB per month.

To illustrate the stark downward revision in the forecast for Australia, The Register has put together the following chart of growth forecasts, based on the VNI 2011-2016, the VNI 2012-2017, and our own calculation of data growth if the 32 percent increase recorded by the ABS from June 2011 to June 2012 were continued. 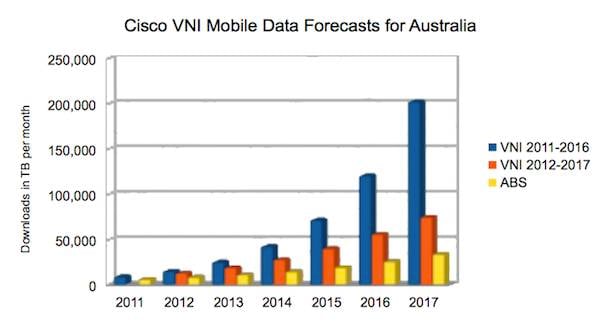 Given the urgency carriers have expressed on the need to add capacity to keep up with data growth, they will no doubt be breathing a sigh of relief at the thought that perhaps their mobile capacity crunch may be slightly less outrageously huge than they feared.

Speaking to Cisco Live! in Melbourne, the company's Roger Pepper (head of global technology policy) also highlighted a growing trend of carriers offloading smartphone traffic to WiFi wherever possible to cope with the growth in demand.

Communications Day reported that Pepper told journalists 26 percent of mobile data will be offloaded to WiFi networks by 2017. ®