Early Homo was about more than being erect

The oldest example of our ancestors' artistic talents has been unearthed, after spending over a century hiding in plain view. 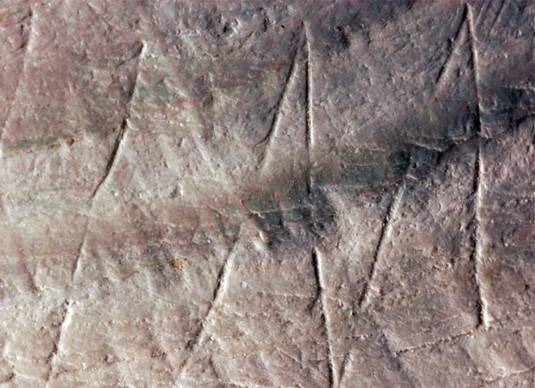 The artifact in question is a mussel shell found near the bones of a member of the species Homo Erectus in the 1890s by Dutch paleontologist Eugène Dubois on the island of Java in what's now Indonesia. After more than 70 years gathering dust in a museum in Leiden a new examination showed one of the shells had been inscribed by an artistic hominid up to 500,000 years ago.

Josephine Joordens, a biologist at Leiden University, was studying the shells to see how the hominid would have used marine resources. A large number of the shells had a small hole punched into a specific spot, which would have severed the mussel's muscle that kept it clammed up and made it easier to open.

Looking at the inside the shell she noticed that someone had carved a series of triangular symbols on the interior, about one centimeter tall. The markings, though faint, came from a mollusc that was around 500,000 years old, making it the earliest artwork ever discovered.

"People never found this engraving because it's hardly visible," Joordens told Nature. "It's only when you have light from a certain angle that it stands out."

Tests on similar shells show that it took a lot of effort to make the carvings. Since Erectus didn't use metal tools, Joordens speculated that a shark's tooth had been used to make the inscription. 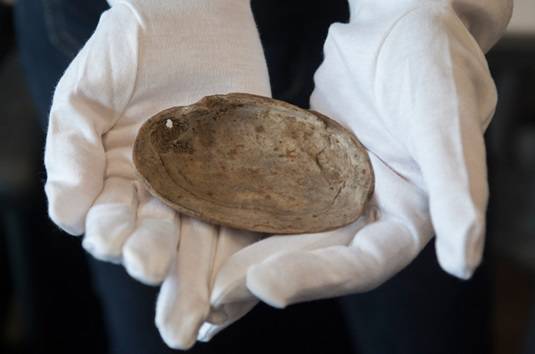 Art was right under our noses

"If you don't know the intention of the person who made it, it's impossible to call it art," said Joordens.

"But on the other hand, it is an ancient drawing. It is a way of expressing yourself. What was meant by the person who did this, we simply don't know. It could have been to impress his girlfriend, or to doodle a bit, or to mark the shell as his own property."

Art is one of the signs of higher cognitive brain functions and early Homo Sapiens spent a lot of time slapping paint on cave walls for his or her edification. In September the first piece of Neanderthal art was discovered from around 40,000 years ago, but the age of this latest find dramatically increases estimates of how long mankind and our ancestors have had an artistic bent.

Clive Finlayson, a zoologist at the Gibraltar Museum who co-authored the Nature paper, said that the find could cause scientists to reconsider what markers we use to indicate advanced human intelligence and to reconsider the role of Homo Erectus, which died out around 140,000 years ago.

"I've been suggesting increasingly strongly that a lot of these things that are meant to be modern human we're finding in other hominids," he said. "We really need to revisit these concepts and take stock." ®