A return to Guadalajara, where the weather and supply chain are better

It is the end of an era – the minicomputer era to be precise – for the IBMers who work in the company's sprawling Rochester, Minnesota facility. Their jobs are moving to Mexico.

Big Blue had a meeting with the approximately 2,800 employees in the facility on Tuesday afternoon and told them it would cease manufacturing operations at the facility, which was built in 1956 and which was expanded significantly over the decades to design and make processors, systems, disk drives, main memory, and various systems software aimed at SMB customers.

The move is yet another step in a long, slow slog toward irrelevancy for the storied facility in the Land of 10,000 Lakes.

IBM stopped making memory in the early 1990s. It sold off its UltraStar disk drive business to Hitachi long after moving most of their production overseas to Singapore, Thailand, and Hungary (and having manufacturing issues it never had in Rochester). The AS/400 team created the first – and only working – 64-bit PowerPC processor after the Somerset partnership of Apple-Motorola-IBM failed from their Austin, Texas labs with the PowerPC 630. IBM moved Power processor development to Austin a long time ago, as well, but the 64-bit core and double-pumped floating point unit invented in Rochester lived on in every AS/400 and RS/6000 minicomputer and their follow-on systems based on the Power architecture, including BlueGene/Q.

An IBM spokesperson tells El Reg that BlueGene/Q manufacturing will remain in the Rochester facility, which is a mile long and about half the size of the Pentagon. But manufacturing of Power Systems machines aimed at the Americas region and based on Power7 and Power7+ processors and their successors will be moved to Big Blue's factories in Guadalajara, the capital city of the Mexican state of Jalisco.

The manufacturing of PureFlex and PureApplication machines will also head south like the Canadian geese that stop on their way to warmer climates and certainly don't want to be caught dead in Rochester, Minnesota, in the winter. Wikipedia says that Rochester has four seasons, but the joke among IBMers has always been that there are two seasons in Ice Station Midrange, "Winter, and getting ready for winter." 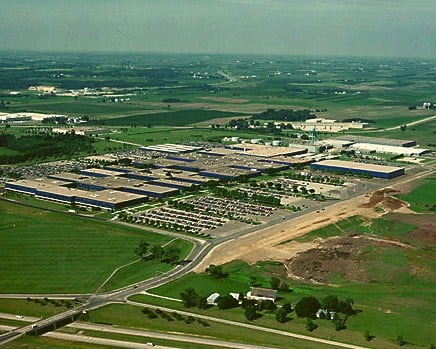 The Power Systems refurbishing business that Rochester runs on behalf of IBM Financial Services will be moved east to the Poughkeepsie, New York, facility, says IBM.

IBM made AS/400 minis in Guadalajara for many years for Central and Latin American markets, but after NAFTA, manufacturing was eventually re-centralized in the Rochester plant to sell boxes to all the Americas region. IBM eventually moved the manufacturing of RS/6000 Unix systems north, too, out of Austin to save money.

In more recent years, high-end Power machines were made in the same factories as the System z mainframes in Poughkeepsie. As far as anyone knows, those high-end Power 770, 780, and 795 machines are still being manufactured at "IBM Pokie". According to the IBM spokesperson, IBM had already moved System x servers, based mostly on Intel Xeon processors with a smattering of AMD Opterons, to Guadalajara. (He did not know when this happened.) And given that PureFlex and PureApplications are meant to be hybrid Power-x86 machines, it makes sense to do it all in the same place.

It also makes sense to do manufacturing in the same place you do product design – at least according to General Electric, which has just announced that it is moving manufacturing of water heaters and double-door fridges back to the States where those products are designed.

IBM used to make high-end Power Systems and System z mainframes as well as entry and midrange Power gear in a factory in Mulhuddart, outside of Dublin, Ireland, to serve European customers. In May 2010, IBM opened up a shiny new factory in Singapore – which cost $90m – to make high-end Power gear and mainframes to serve Asian markets, but then moved the manufacturing of all high-end gear from Ireland to Singapore.

Lee Conrad – who has the most thankless job on earth trying to unionize IBM US workers at Alliance@IBM, Communications Workers of Americas Local 1701, at IBM's original headquarters of Endicott, New York – tells El Reg that the Rochester facility employs around 2,800 workers. Rumors indicate that the manufacturing moves may affect hundreds of full-time and contract workers. IBM has not talked about how many people work at the Rochester facility since 2007, when it was 4,400 people. That is well off its recent peak, which El Reg estimates was 8,100 people back in 1990 and which had fallen to around 7,000 by 2007.

The fact that only a few hundred people are making Power-based machines to serve all of the Americas region shows you just how far shipments have fallen over the past two decades. (KTTC, the local Rochester NBC affiliate, reported that workers at the plant said 200 full-timers and 150 part-timers would be laid off.)

IBM may still be raking in $5bn a year or so in hardware for its Power-based iron, but if CEO Ginni Rometty wants to keep doing share buybacks to pump up IBM's earnings per share, then the cash money has to come from somewhere.

After the manufacturing job cuts, IBM will still have around 2,600 full-time employees at the Rochester facility. They will still be involved in engineering and prototyping projects, and the technical support operations for the Power Systems machines running the company's proprietary IBM i operating system (formerly known as OS/400) will remain in Rochester as well.

The customer solution center, which helps software vendors and commercial clients port their apps to Power Systems iron, will still be there, as well. But, says Conrad, there are "persistent rumors" that IBM will shut down the entire facility by 2015.

IBM says that shifting the manufacturing operations to Guadalajara from Rochester could take until the middle of 2014. IBM's operations will be in a city whose IT and electronics manufacturing accounts for about a quarter of Mexico's export revenues and has a much more diverse ecosystem of tech companies at hand.

The weather is a hell of a lot warmer, too. ®