Era of the Pharaohs: Climate was hotter than now, without CO2

And yet ... Alexandria was not a flooded island

A new study has confirmed that at the time of the Pharaohs the world's climate was significantly hotter than it now is for thousands of years - and yet the seas don't appear to have risen, nor did the various other doomsday scenarios foretold by climate alarmists take place.

The new research, funded by the US government's National Science Foundation, seeks to pull together various different measures of what the temperature might have been in the distant past. Methods included analyses of ancient pollen, deep ice cores, shells from marine organisms etc. The project was led by Shaun Marcott of Oregon State uni.

Marcott and his colleagues, published today in leading boffinry mag Science, have this to say:

Our results indicate that global mean temperature for the decade 2000–2009 has not yet exceeded the warmest temperatures of the early Holocene (5000 to 10,000 years ago) 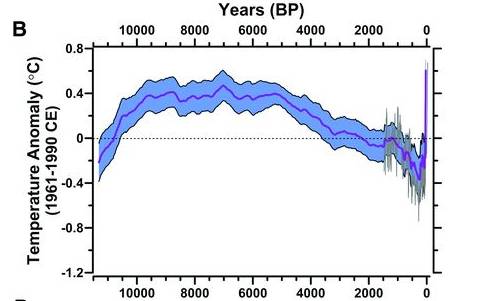 Forget the spike at the right in this context

The graph produced by the researchers, to layman's eyes, appears to contradict this: but that's because Marcott and his crew say they produced it by bolting on the latest version of the famous/infamous "hockey stick" graph, produced partly from thermometer readings in recent times by the famous climate scientist Michael Mann, at the end. The problem with doing that is that the rest of the graph cannot and does not display any variation on scales shorter than 120 years: had there been thermometers recording temperatures globally for the last 10,000 years there may have been many such up-and-down spikes to be seen. That's why Marcott et al freely acknowledge that the world was hotter than it now is for much of the period before 5,000 years ago.

Nonetheless the team consider that the recent rises in temperature are cause for concern against the background they have produced.

"In the last 100 years, the increase in carbon dioxide through increased emissions from human activities has been significant," comments Marcott.

Even so, other climate scientists point out that the methods used by Marcott and his team would not be able to detect previous sharp temperature spikes, which are very plausible (the temperature everywhere on Earth goes up and down wildly off the graph above during any short-term period). Robert Rohde, of the BEST project at Berkeley in California - an organisation well known to lean heavily toward the warmist position - pointed this out very clearly to the New York Times:

In essence, their reconstruction appears to tell us about past changes in climate with a resolution of about 400 years. That is more than adequate for gathering insights about millennial scale changes during the last 10,000 years, but it will completely obscure any rapid fluctuations having durations less than a few hundred years.

And indeed, less warmist-friendly scientists would quarrel with other aspects of the results. Many respectable studies and climatologists indicate that there was a "medieval warm period" around a thousand years ago - and probably also a "roman warm" two thousand years back - during which temperatures were higher than they are today, as we see in this graph from last year produced by scientists at the Johannes Gutenberg-Universität in Mainz:

Phew, what a scorcher, Marcus. Let's get in the frigidarium.

Many warmist scientists would agree with Marcott's picture. They would say that the Medieval and Roman warm times, though the evidence for them is strong, were local phenomena only. Europe may have been warmer then, goes the thinking, but the world as a whole was not (although doubt has lately been cast on this by research which indicates that the Medieval warming took place in Antarctica also).

Be all that as it may, today's study certainly seems to ram the point home that at the time of the first pharaoh - perhaps five thousand years ago - it was significantly warmer than it is now and had been so for much of the preceding couple of millennia.

This is interesting, because it is widely believed in some circles (specifically, dubious warmist thinktanks funded in large part by Google's Eric Schmidt) that global warming to be expected just in this century will mean sea level rises on a scale of a metre or more by the year 2100. More serious scientists agree that such sea level rises are on the cards, but suggest - more plausibly, given the immense mass of the ice sheets which would have to melt - that they will take much longer to appear: so much so that in all probability there will be little difference between the 20th and 21st centuries in terms of sea levels.

Nonetheless, according to those more realistic experts, even if we stop emitting carbon right now - so, perhaps, containing eventual warming to levels like those seen in the pre-Egyptian millennia - we could expect a metre of sea-level rise above present levels by the year 3000 AD.

And yet the ancient Egyptians, despite having lived through pretty much exactly that scenario, don't appear to have seen anything like those sort of sea levels. Respectable geologists project that sea levels just a metre above today's would see the port city of Alexandria become an isolated island or peninsula off the Egyptian coast: but that didn't happen. The Old Egyptian town of Rhakotis on the site which later became Alexandria was a major urban centre right back to 2600 BC and before. This would hardly have been the case had it been largely inaccessible from the fertile farmland of the Delta (much of whic would have been flooded and useless anyway in that scenario, as is expected in the imminent future by alarmists now).

It's interesting stuff, anyway - and doesn't really seem to support the agenda its authors might support. Marcott et al's paper can be read by subscribers to Science here. ®