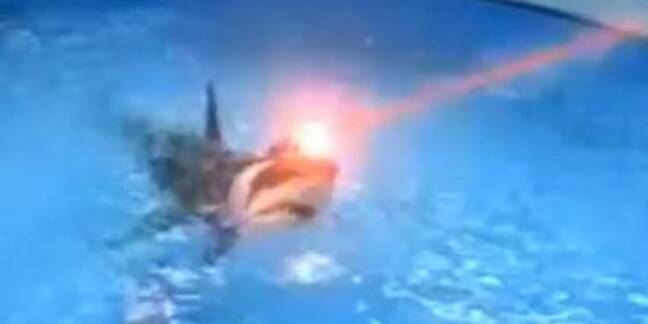 Updated Worrying news today for any Register readers who may be in the neighbourhood of the Black Sea, as news has emerged that three elite Ukrainian navy killer dolphins, possibly armed with deadly weapons attached to their heads, have gone absent without leave in the region, apparently intent on nookie.

As all habitués of these pages will know, the Ukrainian navy possesses one of just two military dolphin formations worldwide (the other belongs to the US navy), having inherited it during the division of the former Soviet Black Sea fleet. Since the end of the Cold War, the combat cetaceans had mostly been employed on peaceful duties: but last year news emerged that the battle-bottlenoses would be trained up once more in warlike missions such as the laying or hunting of mines - or even attacking enemy frogmen using "knives or pistols" attached to their heads.

As long as the warrior sea-mammals remained firmly under naval control, and the Ukraine remained at peace, all seemed to be well. But now it would seem that this is no longer the case. Russian newswire RIA Novosti reports:

Only two of five military-trained dolphins returned to their base in the Crimean port of Sevastopol after a recent exercise ... [They] probably left to look for mates, an expert said on Tuesday.

The menace of the possibly heavily armed sex-mad dolphins may be short-lived, however. A former naval dolphin expert informed RIA Novosti that in Soviet days it had been fairly common for combat cetaceans to disappear in search of nookie during operations, but that the creatures generally returned - lusts sated, doubtless - after a few days. ®

Much of the internet is now describing this story as a "hoax", on the basis that the Ukrainian government still stoutly denies that it has any naval dolphins (as we said above), and the director of the Ukrainian State Oceanarium - at least some of whose dolphins are apparently retired from the navy - says he hasn't lost any of his charges.

RIA Novosti for its part is sticking to its reporting which says that the Ukrainians do have a secret, armed dolphin unit despite their denials - and that some of its combat cetaceans are AWOL, possibly tooled up, and hoping for love.