The latest entrant to DARPA's $2m Robotics Challenge is a four-limbed robot with near-human strength and the dexterity to climb ladders or use tools. 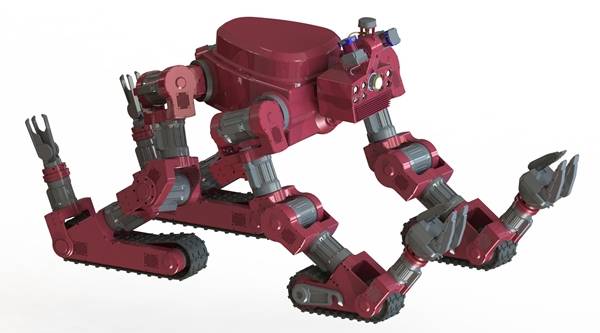 Don't try and feed it a banana

The CMU Highly Intelligent Mobile Platform (CHIMP) from Carnegie Mellon University uses mounted tracks on each triple-jointed limb to move like a tank over roads and rough ground, but can rise up onto two tracks to use the triple-fingered manipulators to climb up ladders, remove debris, or even turn a steering wheel.

"In a pinch, it can do anything," said Tony Stentz, director of the university's National Robotics Engineering Center (NREC) and team leader of the Tartan Rescue Team, which is building CHIMP.

"Humans provide high-level control, while the robot provides low-level reflexes and self-protective behaviors. This enables CHIMP to be highly capable without the complexity associated with a fully autonomous robot."

The Robotics Challenge calls for a robot that could handle a situation like the Fukushima nuclear accident in Japan. Robotic entrants for the $2m prize must be able to operate without a power line or wired connection, enter and clear a rubble-strewn area, climb a human-size ladder, traverse a walkway and operate valves and tools. 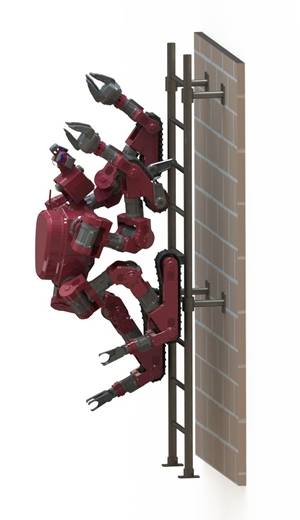 Robot to the rescue

That takes a lot of processing power – not to mention some fairly heavy-duty materials engineering. Stentz helped program the driving system for the Curiosity Mars rover, and is a specialist in using incremental algorithms and heuristic search to speed up decision-making.

The CHIMP uses what processing power it has for balance, collision avoidance, and navigation, and can be operated standing up on two tracks leaving the other two limbs available for clearing rubble or operating tools. This does take more processing power for balance, however, so it cuts down on the robot's run time.

The design has been accepted into the top group of Robotics Challenge entrants, and the first round of tests – which are purely software based – take place in June, with the finished robot competing physical tasks in December. If no one wins, a second round will take place in December 2014.

At stake is $2m in prize money – but more importantly, a lot of industry funding to follow. DARPA's challenges to build an autonomous vehicle saw the winning teams being snapped up by Google and other car manufacturers eager to use their ideas. ®