Canonical's mobes and slabs may actually be useful soon

Ubuntu developer Michael Hall has posted screenshots of early versions of what Canonical is calling the "Core Apps" for Ubuntu Touch, the new flavor of the popular Linux distribution that's being rewritten to run on mobile devices as well as PCs.

There wasn't much you could actually do with Ubuntu Touch when Canonical released the Developer Preview firmware images in February. The OS would boot, it supported basic internet access over Wi-Fi, and you could place calls with the smartphone version, but most of the preinstalled "apps" were actually just placeholders for software that had yet to be written.

But according to Hall, work is already underway to build a set of apps to handle most of the everyday functions users expect from their phones and fondleslabs.

"We identified a number of desired applications, recruited interested community contributors, and dedicated design and project management resources from Canonical staff," Hall wrote in a blog post on Tuesday. "The actual development phase for these apps has only recently started, but some of them have shown a huge amount of progress already." 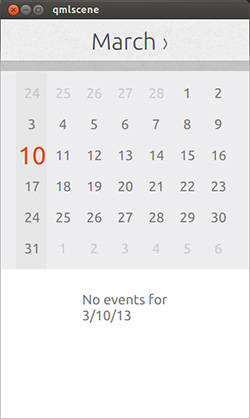 It ain't pretty, but it's a calendar (click for video) 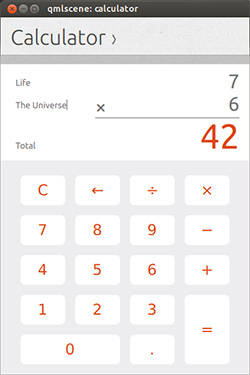 Whether you agree with Hall's definition of "huge," dear reader, we leave up to you. Most of the Core Apps are still in their infancy, meaning they aren't much to look at.

The Core Apps collection includes the kinds of basic utility apps found on just about every mobile platform, including a calculator, a calendar, a clock, and a weather app.

In addition, a number of independent app developers have been working on apps outside the Core group, including feed readers, a WhatsApp client, and such games as chess, Sudoku, and a bubble-popping game.

Longtime Linux users will doubtless observe that versions of all of these apps already exist for the open source OS, and many of them are far more mature and feature-rich than Canonical's counterparts.

What sets the Ubuntu apps in Hall's showcase apart, however, is that they were all built using the new Ubuntu SDK, an alpha version of which was released simultaneously with the Touch Developer Preview ROM images.

The SDK is based on the Qt toolkit and its related QML markup language, which Canonical wants to make the de facto UI development standard for Ubuntu across all form factors supported by the OS, including the desktop, tablets, smartphones, and Smart TVs.

That converged development model is expected to arrive with a future version of Canonical's Unity GUI desktop environment, which is currently being rewritten both to support QML and to run on the company's recently announced new display-server software, Mir.

To see screenshots of the full range of Core and third-party apps for Ubuntu Touch, including some video and links to more information about some of the apps under development, click on over to Hall's blog post.

Developers who would like to get involved with helping to build the Core Apps, on the other hand, can do so via the project's page on Launchpad. ®