The European Space Agency (ESA) is claiming a world first after releasing evidence that its GOCE gravity satellite picked up sound waves produced by the Sendai earthquake of March 2011.

The ESA explained that particularly large ‘quakes – like the magnitude 9.0 incident that hit Japan – cause the planet’s surface to vibrate, producing sound waves that travel upwards through the atmosphere.

Those waves have never before been recorded from the heavens, but as GOCE passed through the waves its accelerometers picked up “the vertical displacements of the surrounding atmosphere in a way similar to seismometers on the surface of Earth”, ESA said.

ESA said the size of sound waves produced by earthquakes increases from centimetres at the earth’s surface to kilometres in the thinner atmosphere at 200-300kms up, where the satellite orbits. At this height it’s only possible to monitor low frequency infrasound, it added. 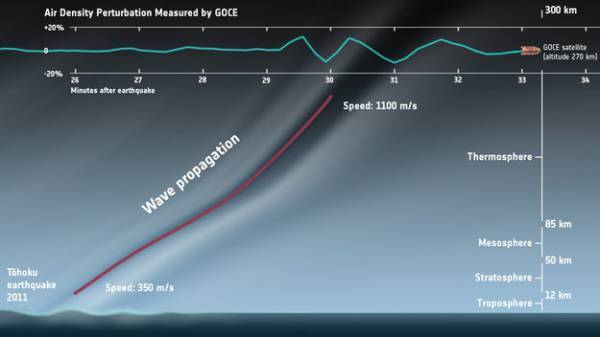 It’s unclear why astro-boffins at the agency have only now discovered the sound waves, but now the precedent has been set there are hopes that satellites could help advance the study of earthquakes.

“Seismologists are particularly excited by this discovery because they were virtually the only Earth scientists without a space-based instrument directly comparable to those deployed on the ground,” said Raphael Garcia from the Research Institute in Astrophysics and Planetology, in a canned statement.

“With this new tool they can start to look up into space to understand what is going on under their feet.”

GOCE (Gravity Field and Steady-State Ocean Circulation Explorer) was launched in 2009 to map the earth’s geoid by measuring minute changes in gravity.

Orbiting at just 270km up, it was designed to be extra streamlined to minimise the atmospheric drag at that height and uses electrically-powered British-built ion rockets to stay on course. ®