New nuke could POWER WORLD UNTIL 2083

A company spun off from MIT is claiming it has cracked the holy grail of nuclear technology: a reactor design that runs on materials the industry currently discards as waste and which could meet all of the world's power demands for the next 70 years. It's also "walk-away safe," the designers claim, making it immune to the kind of meltdown that destroyed the Fukushima reactors.

The Waste Annihilating Molten Salt Reactor (WAMSR) is based on designs first dreamt up in the 1950s for reactors that used liquid rather than solid fuels. Two graduate students at MIT have now upgraded those designs so that the reactors can be fueled by nuclear waste, and also designed a safety system that will automatically shut the reactor down without power or human intervention.

Most conventional nuclear reactors – in the US at least – are light-water reactors, but this design has a number of disadvantages. The reactors only use about 3 per cent of the potential energy stored in the uranium pellets that power them, and the resultant waste still contains enough energy to be radioactive for hundreds of thousands of years. The average US plant produces 20 tons of such waste a year.

They also suffer from safety problems, since an external power source is required to cool the reaction chamber and to shut down the plant if necessary. It was the failure of these power systems (owing to the tsunami cutting both power to the plant and swamping the backup generators) that caused Fukushima's reactor problems.

The WAMSR takes "waste" fuel pellets and dissolves them in molten salt. The fluid is then pumped into a graphite core to induce a reaction and generate heat, which is extracted via a heat exchanger and used to drive steam turbines and generate power. 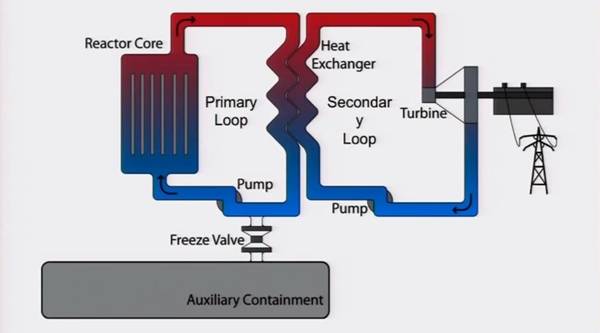 The design is much more fuel-efficient than light-water reactors – using 98 per cent of the potential energy in uranium pellets – and a WAMSR unit would produce just three kilos of waste a year that would be radioactive for only hundreds of years rather than hundreds of thousands.

With around 270,000 tons of nuclear waste available worldwide, the reactors would be enough to supply all the world's projected energy needs for the next 70 years. As a side benefit, this could also reduce nuclear proliferation since countries would no longer have to manufacturer nuclear fuel.

As a safety feature, WAMSR's liquid-fuel pipes are connected to a drain plug of salt that has been frozen solid. If humans aren't around and the power to the plant fails, the plug melts and the nuclear fuel drains into a holding tanks, cools, and solidifies over the space of a few days.

The initial design for WAMSR is a 500MWe (megawatt electrical) plant that can be manufactured as a standalone unit and be shipped directly to customers, ready to be fueled up and switched on. It would cost around $1.5bn – which may sound like a lot, but is dirt cheap compared to a garden-varity nuke plant these days.

The team has been joined by Russ Wilcox, cofounder of the E Ink, the company that produces the displays fronting many e-readers, to start a company called Transatomic Power which to sell the invention. The founders said that they weren't expecting many orders from the US, but China is a strong contender, given the hundreds of power plants the Middle Kingdom wants.

"Nuclear energy is the only low carbon energy source that is both scalable and already generating large amounts of electricity around the world," said Dr. Richard Lester, head of the department of nuclear science at MIT.

"When we look at the world's rapidly growing demand for energy and combine with the need for deep reductions in carbon emissions to avoid worst of climate change," Lester said, "it's hard to know how we're going to achieve this without an expansion in nuclear energy." ®