OpenSUSE 12.3: Proof not all Linux PCs are Um Bongo-grade bonkers

GNOMES sneak past the dark-side of KDE

As with the previous release, the default KDE desktop theme for openSUSE is one of the nicest you're likely to find. This time around, the look has been tweaked to make things a bit darker, which doesn't feel quite in keeping with openSUSE's image, but perhaps that's part of the "finding a new direction" goal that was part of last year's project restructuring.

Whatever the case the new darker desktop is still a thoroughly well-designed theme that even manages to make non-KDE apps such as Firefox or image editor GIMP feel like a natural part of the KDE desktop.

If KDE is your desktop of choice, openSUSE 12.3 is well worth at least a test run. Not only is it speedy, it's the best looking default KDE desktop you're likely to find. If you like to tweak your desktop to get it just so that may not matter much, but if you prefer to leave things as they are and just want a nice looking theme while you work, openSUSE 12.3 makes a slick choice.

Under the hood, openSUSE 12.3 updates to Linux kernel version 3.7, which has quite a few new features, including updated driver support for Nvidia graphics, better virtualisation support and some optimisations that should make Linux play nicer with the still-experimental file system Btrfs. This release is also among the first to work on ARM-compatible chips. Enterprising users have already managed to get openSUSE running on Google Chromebooks.

If KDE is not your bag, fear not: openSUSE has a nicely themed GNOME desktop release as well. The GNOME shell version of openSUSE ships with GNOME 3.6 this time around. GNOME 3.6 is old news at this point, especially with 3.8 just around the corner, but if you're upgrading from openSUSE 12.2, it's well worth the update and continues to improve on the radical rewrite that is GNOME 3. 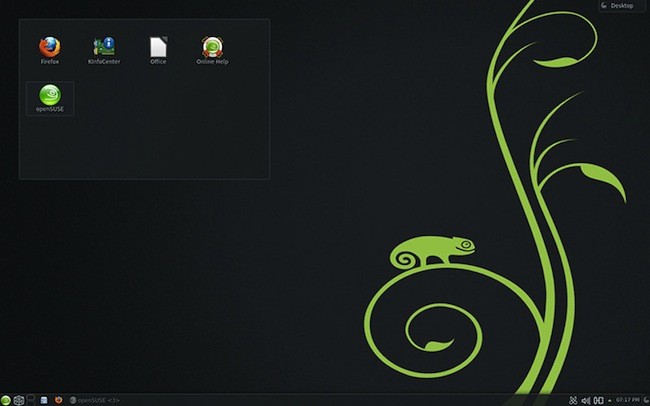 This version sees a number of new features, such as an Apple Expose-style tool to reveal thumbnails of all the open windows, and a streamlined Nautilus file browser that offers a new menu for quickly getting hold of recently opened documents. GNOME 3.6 also brings a full complement of upgrades for bundled GNOME apps.

The openSUSE project also supports both the Xfce and LXDE desktops, with the former also serving as the stripped down desktop for the recovery CD.

Back when openSUSE 12.2 was released I wrote that the distro felt caught between worlds, with one foot still in the enterprise (it is, after all, connected to SuSE Linux Enterprise Desktop) and one foot in the consumer desktop space. To some extent openSUSE still feels that way, although it also feels like it's beginning to find its way and that the pendulum is swinging more toward the consumer desktop side of the equation. Not necessarily at the expense of openSUSE's enterprise tools though, which, like YaST, remain a part of the distro.

In fact, the server side of the chameleon has some great new stuff as well. Chief among the updates is a new version of cloud-hosting favourite OpenStack, which first shipped with openSUSE 12.2. Other updates include the latest version of Gnome Boxes for managing virtual machines, as well as updates for databases including PostgreSQL.

OpenSUSE may not get the press coverage that rival Linux distro Ubuntu manages - what with its ad-ware controversy - and I wouldn't expect to see an openSUSE phone or tablet any time soon. But openSUSE does offer a rock-solid release that's well worth considering, especially if you're a fan of the KDE desktop. ®