During September 1982, Camputers moved from Cambridge’s Hill Street to the more central Bridge Street opposite The Mitre and Barron of Beef pubs - the latter site of the famous physical confrontation between Sir Clive Sinclair and Acorn’s Chris Curry, though the fight wouldn’t break out for a few years yet.

Jansons’ powerful Basic would be placed along with the hardware drivers - written by Shane Voss and Fiona Miller - and such into 16KB of Rom. The Rom’s graphics routines were written by Michael Behrend and Ron Penrose. Of the 48KB Ram on board the basic model, 32KB was assigned to the Lynx’s bit-mapped 256 x 248 hi-res display, which could be extended to 512 x 248 with extra Ram. Each pixel was “accessible and colour programmable”, said Shirreff, who had designed the device to be readily expandable. 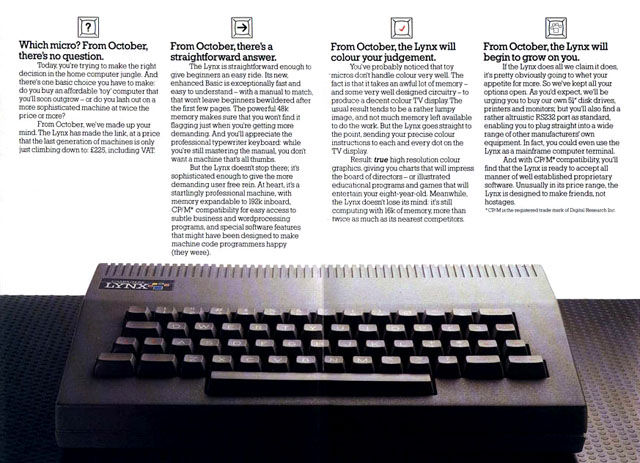 In September 1983, Camputers was expecting to ship the Lynx the following month

“The whole design philosophy was linked to expandability - particularly now that memory is becoming so cheap,” he told Popular Computing Weekly early in September 1982. “The main difficulty with the design was its memory banking arrangement. I think we have developed a convenient and unconventional system which has many speed and software advantages.

“The machine has been designed to switch memory in 64KB blocks - larger units than most micros. There are problems switching 64KB units on the Z80A - you end up switching the section you are executing. But there are new ways round these problems. Because of its memory banking, the Lynx can run CP/M. Most low-cost micros will not run CP/M because the Rom gets in the way.

“This sets the Lynx apart from other micros making it more flexible. You can keep hanging on extra 64KB blocks of memory indefinitely.

“If the Lynx is used as a graphics terminal for a mainframe - for which it is well suited - you can dump a screen full of information into the work space, manipulate it, and put it back. The Z80 is a very good processor with a long future, particularly for bit manipulation. The snag is that it doesn’t have a fixed access time, but the Lynx gets round this.”

Shirreff was confident that the remaining bugs could be sorted out and the machine could go on sale in October. The prototype put on show was, says Geoff Sore, “a working unit. It wasn’t a keyboard on an empty box with everything underneath. There might have been a few link wires in it, of course” but it wasn’t ready for release. The Basic needed further debugging, and there were still some timing issues to be ironed out on the main board; the manual wasn’t ready, either.

Indeed, come October and Camputers had to admit that it had delayed the release of the machine to mid-November. Even that proved a little optimistic - production didn’t begin until December, and then only in small quantities, Sore recalls. “We did actually ship some in December 1982, not many, but some. Real production didn’t really get going until after Christmas.” Not bad, perhaps, for a machine that hadn’t even existed on paper nine months earlier.

Some machines went out to computer magazines for review, others to software companies who had expressed an interest in developing applications for the Lynx. Not that Camputers felt confident in the ability of those firms to get programs out quickly. A dearth of software prompted the foundation of CamSoft to fill the gap. Meanwhile, retail deals had been struck with the Spectrum chain and Laskys, who together took almost all of the machines being punched out in the new year: 900 were assembled in February, with the monthly output rising to 1000 by May. Lynxes started to appear in shops in March 1983, by which time Camputers had shipped 2000 units, it said later.

The reaction of early users and reviews was generally positive. “The Lynx is simply a good micro. It has no wonderful outstanding qualities, but in every department of its specification it ranks alongside the best. It is as though the designers took the best features of all the popular micros and put them together in one box,” wrote Bill Bennett in the February 1983 issue of Your Computer. “So the Lynx represents a consolidation of previous advances as well as a tiny advance of its own. By utilising technology that has already passed the test of time, it should have fewer teething troubles than some micros which aim to break new ground.”

Yet there were aspects of the Lynx that allowed it to stand out from the crowd. “The graphics on the Lynx are perhaps its strongest feature. Resolution is high, and unlike most other home computers all eight colours can be mixed on the same screen,” noted Bennett. “There are 256 x 248 pixels, and a good set of commands to use them to create some very good graphics.”

Computing Today’s Don Thomasson, in the magazine’s June 1983 issue, noted that: “The display uses 32-column hardware to generate a 40-column screen format, by the simple expedient of using a 6 by 10 character matrix instead of the more usual 8 by 8 pattern. This allows the 40 columns to be covered by 240 bits, where other systems use 256 bits for 32 columns. The concept is simple, but its consequences are not, especially as three complete screen RAMs are used, one for each primary colour.” 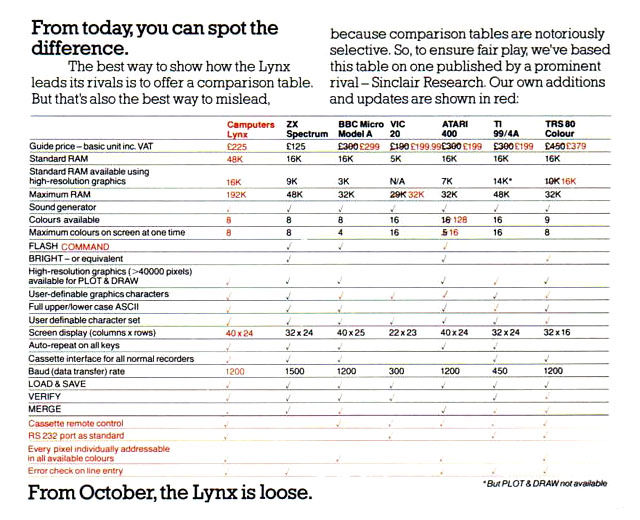 How Camputers saw the Lynx lining up against the competition

Max Philips, writing in Personal Computer News, praised the Lynx’s “almost unrivalled colour graphics... Everything about the Lynx display is done in software. So, as well as standard line-drawing facilities, the Lynx can perform tricks such as user-defined characters, sub and superscripts, double-height characters and so on.

“The Lynx uses three separate banks of memory to remember what is on the screen: one for each base colour red, green and blue. Using the PROTECT command, you can disable and or all of the banks and thus prevent particular colours from being written or erased from the screen.

This is more useful than it at first seems. Its main use is that it makes programs faster. If only one of the banks is working, then the Lynx has less to do when you write to the screen. So you can write reasonably quick animated graphics in basic.”