Your Computer's Bill Bennett also lauded the Lynx Basic’s support for inline machine code instructions. “What will attract people is a simple-to-use machine-code facility. The monitor in the Lynx’s ROM allows the user to write and edit programs written in machine code. [The] CODE [command] allows you to store machine code in a Basic line. LCTN is in effect a pointer to the first byte of machine code stored in a CODE line: it is used as an ordinary variable. Type CALL to tell the computer to execute the machine-code sub-routine held in one of the CODE lines, which is specified by LCTN. Bytes of data can pass into and from the Lynx via the I/O port at the rear. This can be done using the commands INP and OUT.”

Tim Langdell, writing in Popular Computing Weekly, gave a thumbs up to Davis Jansons’ Basic. “What [Jansons] has managed to cram into the 16KB of Rom is quite incredible. He has created a new Basic with similarities to Microsoft, BBC and Sinclair Basic... The Lynx Basic is structured as the BBC machine’s is - with Procedures, If-Then-Else, and so on - but goes further than the BBC by having While and Wend too.” 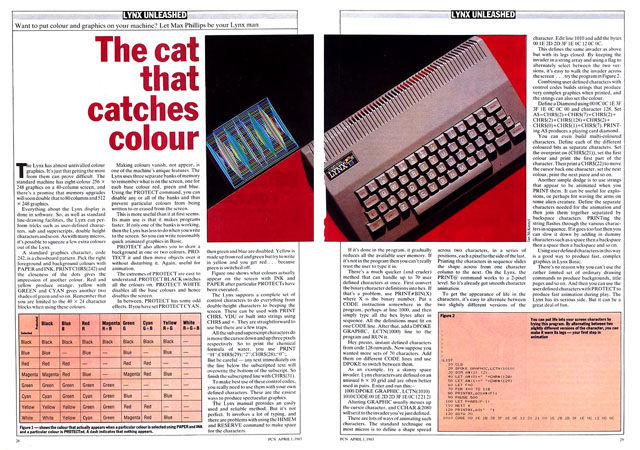 Personal Computer News praised the Lynx's graphics - as did other magazines

Not that the Basic was perfect. Thomasson, as other reviewers did, pointed to the Lynx’s weak sound support in Basic: “There is a BEEP command specifying 'wavelength', number of cycles, and loudness, the last varying from quiet to inaudible.”

Maggie Burton, reviewing the Lynx for Personal Computer World, noted Jansons’ Basic “includes some very odd qualities indeed... First and foremost, it won't allow multi-statement lines. Now, quite a few older machines are the same, and Jansons explained he did this to improve readability of listings. But the alternative in the area of code-cramming is to use line numbers with a decimal point! This means you can have a huge number of lines in a program - four figures after the point are allowed - and this is far more than you could ever need... One of the [other] major disadvantages of the Lynx is the fact that it will only accept single-letter variable names, although the interpreter distinguishes between upper and lower case.”

And the aforementioned praised-by-all smart graphics came at a cost: “One of the worst penalties is that the screen does not scroll, wrapping around vertically instead, but this is usually relevant only to listings and dumps. The use of the main processor, plus a specialised display chip, means that action is necessarily slower,” judged Thomasson. That was one reason why the Lynx attracted so few action games to its roster of software.

“Lynx seems to have struck a very good middle ground in trying to please the serious user, the first time buyer of a home computer, and the small business user. In many ways, the Lynx must rival micros costing at least twice as much (such as the BBC Model B and new SuperBrain) in the business sector, as well as offering extremely strong competition to micros in the £175 to £225 region such as the Dragon 32, the Vic and the 48K Spectrum,” concluded Langdell.

Meanwhile, as had been the case in 1982, Camputers was finding money a problem. In March 1983, the company arranged a £300,000 loan from Barclays. That, and the confidence in customer demand expressed by their retail partners, persuaded the Camputers bosses to plan a major rights issue. It would offer 6.4 million shares in the newly constituted Camputers Plc, now effective owner of GWDS and CamSoft. The goal: to make £900,000 with which to pay back that £300,000, up Lynx production, develop more software and to complete the development work on the other Lynxes in the line-up.

These had still failed to appear. The problem was the disk drives, says Geoff Sore. These had been farmed out because of Camputers had no experience writing firmware or a disk operating system - and it lacked the financial resources to hire in suitable talent. The £299 96KB machine was intended to go out with extra Rom - 4KB of it - to support the drives and add extra Basic commands. Camputers didn’t want to release the 96KB machine without the drives because as soon as the machine came out, the company would have to offer an upgrade path to 48KB owners: extra slot-in Ram and Rom chips. It didn’t want them to then have to upgrade a second time when the drives finally appeared.

“The 48K wasn’t premature, because on its own it did everything we wanted it to do,” recalls Geoff Sore. “For full forward compatibility you have to develop the last model first and then strip it back down to the basic machine, but we didn’t really have the time or the money to do that. We’d have gone bankrupt before we shipped. We knew the 48K couldn’t use the disk drive because there was not enough memory, but the Spectrum and such were out, and there was huge pressure to get revenue.

“The 96K was basically just a memory addition and some added features in the Basic. But that coincided with the disk drive; we wanted to make sure the 96K would work with the disk drive, and as I say there were problems with the disk operating system, and it cause a lot of heartache. I suspect the 96K could have been shipped a lot earlier, but we would have had to take them back to swap the Rom to support the drive.”

The drives were due early 1983, but were then promised for April and, when that deadline came up, for June. “The RS232 port is not entirely functional at present and the hardware boys are wrestling with it as a top priority,” Personal Computer News was told. Camputers demo’d the 96KB Lynx at the Earls Court Computer Fair in June 1983, after which it emerged the machine wouldn’t now be out until September - a year after the Lynx had its first public outing.

The drive delay also hindered work on the 128KB Lynx, on which Camputers’ attack on the business market would be based since it was the only machine of the three to have enough free Ram to run CP/M. Shipping the 128KB Lynx, and the 96KB model too, was among the key predicates for Camputers’ June 1983 forecast of £750,000 pre-tax profits by 31 March 1984, highlighted in the company’s rights issues prospectus.

Come September 1983, the 96KB Lynx did indeed go on sale complete with the augmented Basic Rom. Owners of 48KB machines were able to upgrade for £89.95, a process that involved returning their computers to Camputers, which would swap out the Rom chip and add the extra 64KB by way of a daughter-card into one of the slots John Shirreff had designed in specifically for it. The release of the 128KB Lynx was now scheduled for later in the autumn. It was formally re-announced in December, when Camputers bosses must have understood that it could ship the following year. It did, but not until March 1984. 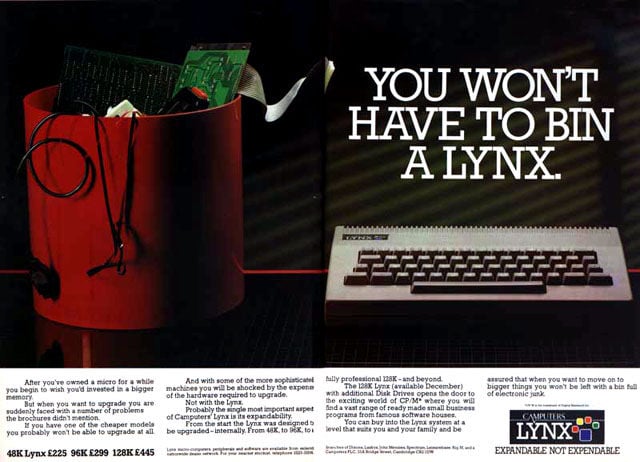 The 128KB Lynx comprised a new motherboard, updated Basic, a high resolution 80 column x 24 row text screen, and CP/M 2.2 using the standard disk drives. The 48KB and 96KB Lynxes both used a Z80A microprocessor clocked at 4MHz, but the new top-end model incorporated a 6MHz Z80B microprocessor, giving a substantial speed improvement. Unfortunately, contrary to what Camputers had previously stated, the souped up Lynx was not fully compatible with software written for the earlier models.

“At some point we decided the Z80A wasn’t fast enough to run CP/M,” remembers Geoff Sore. “The 128 was a effectively a Mark 2 Lynx - there were quiet a lot of differences in the hardware structure, and that unfortunately affected some of the software, so some of the 96K software wouldn’t run on the 128K, contrary to the marketing.”