Hang on, so should I put the washing up or not?

Instead of getting the usual updates such as "partly cloudy over the British Isles with a chance of rain later" the 60,000 followers of the @BBCWeather account on Twitter were confronted with a series of bizarre messages. These updates included:

Saudi weather station down due to head on-collision with camel 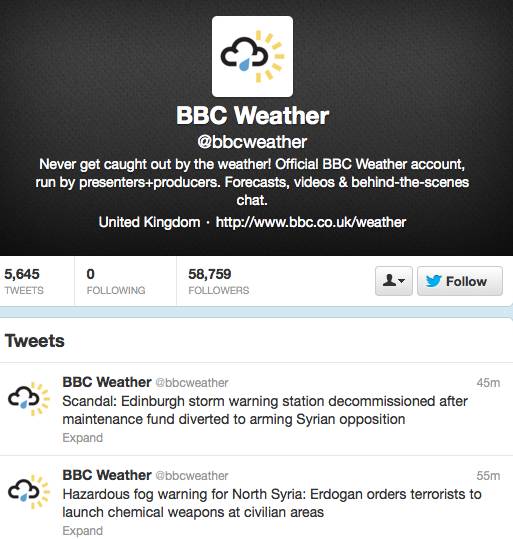 "Whether the legitimate owners of the @BBCWeather account were phished, had their password cracked, or made the mistake of using the same password in multiple places isn't currently clear - but what is obvious is that right now they have no control over their account," writes Graham Cluley of Sophos in a blog post.

The hack appears to have been motivated by a desire to push out propaganda to a wider audience rather than any intention to spread malicious links, or to promote diet scams, two popular reasons for Twitter account hijacks, which are becoming increasingly frequent.

The @BBCWeather account was compromised for around two hours before the offending tweets were deleted and normality restored. ®